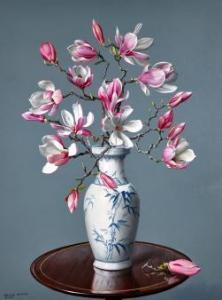 Lessons from the Zen Masters to help you along the Path.

One day, in a remote Zen monastery, the Guardian of the monastery passed away.  The Master then sought to find a replacement for the loyal sentinel. He gathered all the students together and declared:

The first one able to solve a problem that I will present will be the one to take the place of the late steadfast Watcher.

Upon a very sturdy table, the Master set a rare and very fine porcelain vase.  In the vase was the most perfect and immaculate white rose.  After he had done this, he declared:

“Here it is the problem.”

All the students were perplexed, for this was a sight of such rare beauty, and the perfume of the rose slowly inebriated their senses. Each of them was trying to understand how such a beautiful vase with a perfect flower could be a problem.  What did it signify?  What was the enigma?

Suddenly, from the back end of the room, one of the disciples came forth with a sharp sword in his hand. He looked at the Master, went to the center and with one hit destroys the vase, leaving the white rose petals to drift to the floor.

"Congratulations," said the master, "you are the new watchman."

It is not important if a problem is of great beauty or rarity.  If it is a problem, it must be eliminated.

Zen is a school of Mahayana Buddhism that originated in China during the Tang dynasty as Chan Buddhism. It was strongly influenced by Taoism and developed as a distinguished school of Chinese Buddhism. From China, Chan Buddhism spread south to Vietnam, northeast to Korea and east to Japan, where it became known as Japanese Zen.
Zen emphasizes rigorous self-control, meditation-practice, insight into Buddha-nature, and the personal expression of this insight in daily life, especially for the benefit of others. As such, it de-emphasizes mere knowledge of sutras and doctrine and favors direct understanding through zazen and interaction with an accomplished teacher. (WIKIPEDIA)