Esoteric Definitions of the Science of Invocation & Evocation 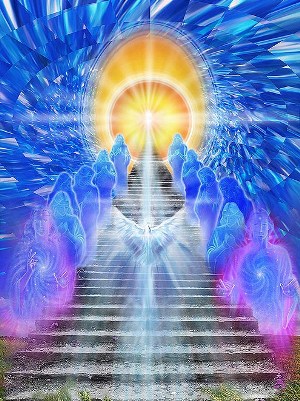 Invocation, from the Latin verb invocare, means to “call on”, “to give”.  It is the calling down into active play of a Deity which overshadows an individual or a group of individuals. Invocation can refer to taking on the qualities of the being invoked.  In this instance, the Being is literally called up from within oneself, as an archetype, or into oneself, as an external force, depending on the personal belief system of the invoker. That which is invoked may appear in one of many forms, such as an idea, an experience, or in the case of a needy humanity, even as the incarnation of an initiate consciousness.

Thus, Divine Intervention is brought into being via the magnetic pull of the invocative center, which is acting as a positive pole of magnetic attraction within the three worlds of human endeavor.

It is interesting to note that the “Invocation”[1] as a Sufi Universal prayer forms the main centering prayer of Universal Sufis. Evocation is derived from the Latin word evocatio, which means the “calling forth’ or “summoning away”. The calling forth of spirits was a relatively common practice in Neoplatonism, theurgy and other esoteric systems of antiquity. In more recent usage, evocation refers to the calling out of lesser spirits, who are beneath the deific or archangelic level, sometimes conceived of as arising from the Self. This sort of evocation is contrasted with invocation, in which spiritual powers are called into the Self from a Divine source. In a wider sense, evocation is the magical art of calling forth spirits, angels [2] to bring spiritual inspiration to the bidding of the magician or to provide information. Methods for the attainment of this exist in most or all cultures that feature a belief in spirits, such as the shamanic traditions. Taoism, Shintoism, Spiritism and the African-American religions, such as Santería, Umbanda, etc., have particularly sophisticated systems of evocation. Even the various forms of Christian and Islamic exorcism can be considered evocations in this sense, although relatively simple ones.  In our current understanding, it is a calling forth into expression of that Divine Potential which is latent within the manifest form. Thus, the indwelling Christ, that Divine Spark or Seed within the consciousness of the mass, can be attracted into expression via the magnetic pull brought to bear upon it by a conscious Son of God living within the body of humanity.

Aleister Crowley: Magick, Book 4
Kocku von Stuckrad: Western Esotericism: A Brief History of Secret Knowledge.
Lucille Cederans:  The Nature of the Soul,
Alice A. Bailey: The Externalisation of the Hierarchy

[1] "Toward the One the Perfection of Love, Harmony and Beauty, the Only Being, United with all the illuminated Souls, who form the Embodiment of the Master, the Spirit of Guidance." [2] or demons, as done by “the dark brothers”
Tags
Aleister Crowley Divine Intervention evocatio Evocation evoke exorcism invocare invocation invoke Magick Neoplatonism Santería Shintoism Spiritism Sufism Taoism theurgy Umbanda
0 Comments
hhteam October 16, 2011
Facebook
Twitter
Instagram
Pinterest
Youtube