"Only those who see the invisible can attempt the impossible."
~Dick Eastman

The theurgist is someone who believes in the existence of a unique Being; the eternal, omnipotent Being; infinitely wise with infinite goodness; the One foundation of Creation, source of all emanated beings and all temporary ones. This exceptional Being can be called by many names because He can express itself through its many Rays of Glory through countless dimensions and frequencies.

The act of prayer has the momentary functionality to facilitate the fusion between the Lower Self and the superior mind, or our Higher Self.  This is done through connecting the non–self to a higher stance through the linking of a will “magically” developed.

"Prayer requires more of the heart than the tongue."
~Adam Clarke 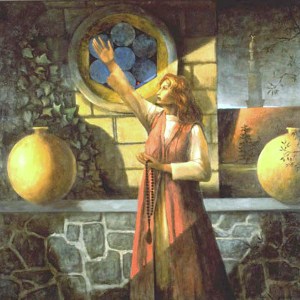 The act of prayer is a ceremonial art by definition, and it is the fundament of any theurgical ritual. It is, in essence, a complex intentional action, because it involves many dimensions of the human being: its attention, its will, and its feelings.  It consists of much more than the empty and shallow act of moving your lips and merely reciting a prayer formula. It is possible, nonetheless, that a prayer, after being recited and ritualistically practiced for many times, to transmute itself into a living template or switch inside of the individual, becoming a conscious reflexive action that manifests a certain frequency of operation.

The words used are just the exterior garment or the universal equivalent of an idealized Intention expressed and used by the seeker. The practice of prayer is undoubtedly more efficient when it is accomplished through the procedure of a ritual because it allows the concentration and the focus necessary to connect the meditational intention with the subject of the prayer.

“Prayer is not asking. It is a longing of the soul. It is the daily admission of one's weakness. It is better in prayer to have a heart without words than words without a heart.”
~ Mahatma Gandhi

Before the right performance of a ritualistic prayer, one must concentrate and map its purposes, making clear the goals and focusing as much as you can the intentions to be directed to the subject of the prayer. It is also important not to do interfere with the bigger picture of things, and not to overrule the works of universal providence. This way, we highly recommend to the one seeking to develop this skill to incorporate the understanding of the major Divine Laws, including the karmic ones, through the use of the phrase: “May this (object or subject of the prayer) be done for the greater good.” In proceeding this way, one can gather the greater understanding of the forces involved that interact in human destiny.

To perfect the action of ritual prayer, one should abstain from solids foods for at least three hours before the ceremony. It should start with at least five minutes of meditation for centering, accompanied with at least three deep and slow breaths. The environment should be tranquil and undisturbed. The seeker should be comfortable and warmed, and, if it is wished, one should use some incense to bring some awareness to the olfactory sense, which can change more rapidly the frequencies of the mind to accept a more spiritual vibrational tone. After these simple procedures of centering and grounding, one is ready to start the ritual of prayers.

The first step is the invocation of the Invisible Masters and Teachers that guard the energies of the circle that the seeker is aligned to. These can vary widely, depending on, for instance, if the seeker is Buddhist, or Christian, or other specific faith, or part of a broader School of Wisdom. The second step is to evoke the Psychic Beings that preside over the evolution of humankind, such as Angels, Archangels, and Devas.  The progressive method apprehends the elevation of the vibrational thought and intention to the Higher Center, the Creator of all things, or the Divine Mind we call God.

The effects of the ritual prayers are considerable because, in the astral plane, for example, elementary forms are magnetized by human words.  For the soul of the seeker performing the ritual prayer some miracle effects can be presented through the integration of a diverse range of feelings and sensations: a deep empathetic connection with the internal worlds, through compassionate, merciful thoughts, and deep consideration to the suffering and plight of others. All of these awakened senses act as a balm to the practitioner soul, shading a light to the perception of the role of our enemies in our lives, the realization of our shortcomings and recognition of our blessings.

During such ritualistic practices, visions may occur, but like everything, even these images, being revelations or not, should have the emotions related to them controlled and consciously directed as energies to the proper center of the heart.  One should avoid falling into a state of deep crying or disarray.

This article is based on the writings of Gerard Encausse, whose esoteric pseudonym was Papus, a Spanish-born French physician, hypnotist, and popularizer of occultism; and who founded the modern Martinist Order.