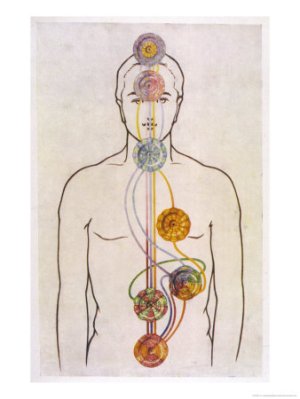 The endocrine glands are part of a very special group of cells that secretes hormones to the blood stream. The hormones are chemical messengers that can control many of the functions of other cells and tissues. For instance, the Adrenals are responsible for the production of body fluids, the lower levels of protein, the levels of glucose in the blood, secretion of adrenaline, and the amount of fat in the body.

“All you may know of heaven or hell is within yourself.”
~Edgar Cayce

Hormones do not only exist in human beings, they are present in nature, in animals and also plants. We find that in vertebral animals, the similarities of hormones among the various species are incredible, in shape, form, and function.

The endocrinal gland' secretions are intimately related to the order and control of the autonomous nervous system, or the Parasympathetic system and its involuntary muscles.

The Parasympathetic nervous system is considered by traditional schools of healing to be extensions of the Nadis system, and in turn, the glands are extensions of the chakras. A Chakra can be presented as a small disc without light or intensity when a person is seriously sick; the same effect as when someone is suffering from spurs of selfishness, greed, or anger. The opposite is also easily observed; the chakras tend to expand and emit brilliant vibes when a person is living life from the heart.

Mystics affirm that in the realm of spiritual development, the chakras are just like wheels of fire that are supposed to work in perfect union with one another, which in turn, then creates an effect of great harmony and beauty. Whether a chakra is fully functioning depends upon the combined development and integration of the other subtle bodies, such as the emotional, the mental, and the physical body. They reflect the holistic approach of our life.

If something traumatic or even an accident occurs, the chakras can suffer damage, just as regular body organs can under the same conditions. Emotional traumas, prolonged grief and being in a state of stressful survival mode, tend to strain the standard flow of energy of the chakras, depleting them, and ultimately causing a series of imbalances that may cause physical illnesses. 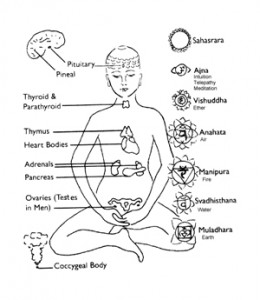 Fear, anger, hatred, joy and all the emotional energies are related to the endocrine glands, affirmed the sleeping prophet Edgar Cayce, because they are responsible for producing the substances that allow the organs to function correctly.  The eyes, nose, brain, lungs, liver and pancreas can’t solely operating in an individual manner, and can only renew themselves through the conjunct action of the glands. Cayce believed that the entire endocrine system was influenced by the “activities” of the soul, and only through the understanding of its mechanisms of the physical body; would it be possible for one to find their understanding to the Divine.

The Hormones govern the wisdom and the interconnection between the cosmic architecture and the incredible physiology of the human organism. Endocrine Glands are accountable for the renewing of the bodies’ cells, their perfect performance, and their rejuvenation; not only in the level of physical energy but also in the flow of energy for the other subtle bodies.

The Chakras and the Nadis System