Nuit or Nut[1] In Egyptian mythology, was the goddess of the open sky, which amazingly enough, conceptually differs from most of the ancient mythologies where the deity of the heavens is always a male figure. Her name is translated to mean “sky” and she is considered one of the oldest deities among the Egyptian pantheon, with her origins being found in the creation story of Heliopolis.

"O my Mother Nuit, stretch Yourself over me, that I may be placed among the imperishable stars which are in You, and that I may not die."

She was originally the goddess of the nighttime sky, but eventually became referred to as simply the sky goddess. Her headdress was the hieroglyphic of part of her name, pot, which may also symbolize the uterus. It is interestingly how Nuit also means Night in French. 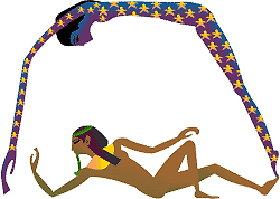 Nuit was evoked and revered as the Mother of all the Gods. Nuit is said to be the daughter of Shu and Tefnut.  Nuit is the wife of Geb, who is also her brother. Being Goddess of the heavens, she is the one that received the souls of people into the heavenly abode after their earthly transition; all of them, except the ones that are evil which are imprisoned in Earthly realms by her husband, Geb. She guides and directs all souls to be judged in the Halls of Amenti.

One of its myths tells how the God RA was swallowed by Nuit at sunset to be rebirth again the next sun dawn. Nuit is also the one that swallows the stars and gives them the gift of rebirth.

"I am Nuit, and I have come so that I may enfold and protect you from all things evil."

Nuit was also regarded as the Goddess of Death, as she was the protector of souls in the afterlife: She who holds a Thousand Souls.  Because of her role in the re-birthing of Ra every morning and in her son Osiris's resurrection, Nut became a key goddess in many of the myths about the afterlife. The soul of the Pharaoh, for instance, was supposed to enter her body and be resuscitated in his home at the stars.  This is the reason her symbol is engraved on most sarcophagus in the royal chambers inside the pyramids; such as the one of Tutankhamen.

Nut is the literally the personification of the Guardian of the Threshold because she represents the divider point between the universal forces of chaos and the ordained cosmos of this world. The ancients also believed that her fingers would touch the four cardinal points or directions of the heavenly sky.

Nuit is the first orator of the first Chapter in the Book of Law, being presented by Aleister Crowley as the female counterpart of the God Hadit. Nuit represents the circumference, infinite and vast which the center is everywhere. Hadit represents the tiny point inside of the circumference, signifying the nucleus in everything. Metaphysically, the union of these two consciousnesses personifies the glyph of the Magnum Opus of Creation. 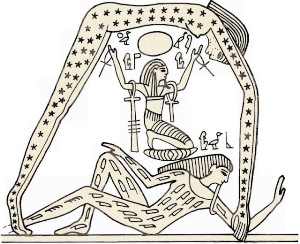 She is known to be the mother of most of the deities of the Egyptian pantheon. She united herself with her brother Geb in a very long embrace until they were separated by Shu, the element air, under the orders of the God Ra. Concerned with the idea that he could be replaced, Ra declared that Nuit was not allowed to bare children during any day, of any month, of any year. With the help of the God Thoth, she found a way to bring her creation into manifestation.  At that time, it is said, the year was only 360 days. Nuit spoke to Thoth, god of wisdom, and he had a plan. Thoth gambled with Khonshu, God of the moon, whose light rivaled that of Ra's. Every time Khonshu lost, he had to give Thoth some of his moonlight. Khonshu lost so many times that Thoth had enough moonlight to make five extra days. Since these days were not part of the year, Nuit could have her children. She had five children; Osiris, Horus the Elder, Set, Isis, and Nephthys. When Ra found out, he was furious. He separated Nut from her husband Geb for all eternity. Despite the great love they had for each other, the goddess did not regret her decision. Nuit is worshiped as the Mother Weaver of the Universe.