Trees have been a powerful ancient symbol through the history of Humanity.  Examples include the Yggdrasil[1] in Norse mythology, the Egyptian Sycamore sitting on the threshold between life and death, and the Kabbalah Tree of Life.  There is no doubt that the icon reaches down to the psyche of human beings with its figure of branches reaching towards heavens but with roots deeply grounded on Earth.

"Hail, thou Sycamore Tree of the Goddess Nuit! Give me of the water and of the air which is in thee..."
~Egyptian Book of the Dead

“The Tree of Life is an important symbol in nearly every culture. With its branches reaching into the sky, and roots deep in the earth, it dwells in three worlds- a link between heaven, the earth, and the underworld, uniting above and below. It is a feminine symbol, bearing sustenance, and a masculine, visibly phallic symbol- another union[2].” 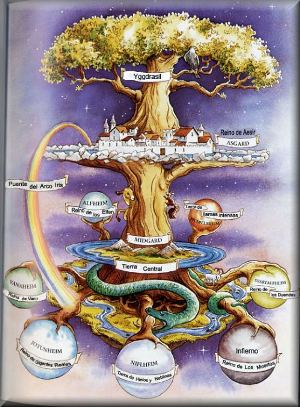 To understand the mechanisms of the Ego, we use the analogy of the tree. A tree develops itself through the nutrients it can gather from the soil, depending exclusively on its roots. Its primary concern is to grow and expand but only in one direction, upwards.  Its growth is eminently vertical and one-dimensional.

The same analogy can be used to define the Ego and how it depends totally on little details, and such as the roots of the tree, the details are the elements that channel sufficient energy to the centers of, our body, the physical human “machine,” to keep the Ego alive. These details are our psychological defects, our weakness, and our imperfections.

If we develop the stamina of soul to face our inadequacy and faultiness, we can cut the roots of the Ego and through a “psychological death,” the Ego progressively loses the grip over our actions, our outlook in life and our emotional reality. The need of the Ego for a survival of the personality in its early stages of development is necessary because it performs the task of the protector. But once one reaches the maturity of heart to intend for its freedom, the Ego becomes yet another layer that needs to be shed, like a garment that needs to be left at the threshold of a new life.
Without limitation, the Ego will inevitably become too strong and powerful and can keep one completely paralyzed by fear, jealousy, and resentments; damaging the multidimensional sense of being human; and reducing every opportunity to enact our life mission into a circumstance of mere survival, competition, and conflict. The Ego is also known to transform the general human predisposition of being rational, cautious and proactive beings, into people of reactive nature.

In this way, every time one strives to perfect himself or to change his perspective and cultivate a universal and open outlook in life, one is contributing to the uprooting of the fears and projections of the Ego. These roots are imperfections that may have been accumulated over the period of many lifetimes.

They may not all be known by us because they can manifest themselves not only into repetitive patterns in our relationship with others, but they can also appear as unusual reactions and verbal behaviors that we sometimes do not even know where they came from.

The Ego does not necessarily die with the physical body; many of these roots are so intrinsically tangled with the Karma that they can end up reappearing during another incarnational term. In the process to release karma and learn lessons, it is imperative to be rid of elements that can limit our existence in the unlimited plan of possibilities which is our Universe.

Only when the Ego is subdued is possible for a being to be awakened to the reality of consciousness and perceive beyond the Veil of Illusion.

The elimination of any psychological imperfection we may have will be, at any level, a psychological death. The collections of repetitive behaviors, thoughts processes, and even addictions are the projections of the Ego, they are our imperfections, and they are inscribed in our physical body as well as in our psyche.

The truth is that every one of us is a product not only of a collection of reincarnational selves but also a product of our ancestry DNA; everything is inscribed in our physical and spiritual genetic information. H.P. Blavatsky says that consciousness “seats in every organ of the body” repeating was have been said by the ancient Hindus, that “every cell in the human body is endowed with consciousness.”

A person is also a product of their environment, of their level of education and cultural information. But the transcendent reality is that a human being is also a Cosmic Being. By the moment of your first breath, all your cosmic history, experiences and programmed script is incorporated into your multidimensional being, and these informational bites are, once re-awakened, the frequency codes that would bring you again to a stage of syntony with the Universe.

In real life, we rarely access or use these “abilities,” and usually we are trained to think of ourselves as passive individuals, products of our education and genetics, but our “Cosmic” DNA alludes that we are much more than that: we are active participants in the Universal process of evolution.  To be aligned with this plane, we need to be responsible and be active subjects in creating our destinies, abandoning the classic posture of the victim which characterizes people still under the heavy grip of their Egos.

[1] Yggdrasil is an immense tree that is central in Norse cosmology, on which the nine worlds existed.