Jesus and the Esoteric Tradition

The Mysteries of Christianity Part IV 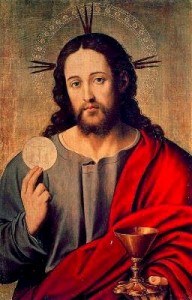 The Esoteric Tradition registers Jesus Christ, as a hierophant of ancient mysteries, and the creator  of  some secret rituals, with the strict focus of the training and expansion of consciousness of his disciples.  These "sacraments" went beyond the ritual of Baptism and Eucharist:

“While they were eating, Jesus took bread, and when he had given thanks, he broke it and gave it to his disciples, saying, “Take and eat; this is my body. Then he took a cup, and when he had given thanks, he gave it to them, saying, “Drink from it, all of you. This is my blood of the covenant, which is poured out for many for the forgiveness of sins.”
~ Matthew 26:26-28

“This is my blood of the covenant, which is poured out for many,” he said to them. 25 “Truly I tell you; I will not drink again from the fruit of the vine until that day when I drink it new in the kingdom of God.” When they had sung a hymn, they went out to the Mount of Olives.”
~ Mark 14:22-25

“When the hour came, Jesus and his apostles reclined at the table. And he said to them, “I have eagerly desired to eat this Passover with you before I suffer. For I tell you, I will not eat it again until it finds fulfillment in the kingdom of God.  After taking the cup, he gave thanks and said, “Take this and divide it among you. For I tell you, I will not drink again from the fruit of the vine until the kingdom of God comes.” ~ Luke 22:14-20

The registering of these rituals by the Esoteric Tradition help us understand  the intimate nature of the relationship Christ had with his disciples. These ceremonies were  veiled in the Bible.  An example of which is the rite of the hymn sang by Jesus Christ and his disciples after the Last Supper.  It was recorded in a brief and enigmatic manner and itemized in the same fashion in Mark (14:26) and Matthew 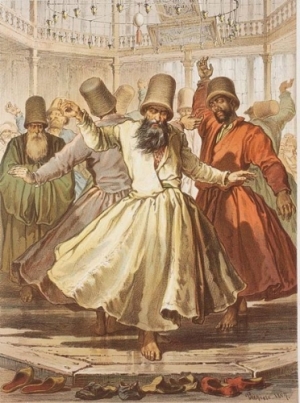 Nevertheless, this ritual was preserved through an apocryphal document known as the Acts of John and it was later published as the Hymn of Jesus Christ. In the ceremonial of the hymn, the disciples are said to be in a circle, holding hands. Jesus gave the tone and frequency of the hymn in the center of the circle.  The disciples would respond Amen and move in circles. Does the description of this ritual seem familiar to what the whirling dervishes do in their Rituals of Ecstasy?

The power of the hymn could be expressed by some of its sayings:

“Glory to you, Father!

Glory to you, The Word!

Glory to you, Grace!

Glory to you, Spirit!

Glory to you, Sacred!”

The rite continued with an encompassing rhythm, which progressively induced the participants to a higher level of consciousness.  In the same canticle, we find declarations of an esoteric nature, such as:

“Now respond to my dancing!

See yourself in me when I speak!

And seeing what I do, keep silence about the Mysteries!”

It ends with an interesting phrase that announces something that was also espoused by the modern psychology Carl Jung:

“If you have known how to suffer, you would have the power to avoid suffering. Know the suffering, and you will conquer the power to do not suffer.”

Mystical Christianity, and The Remembrance of God