No one can tell, when two people walk closely together, what unconscious communication one mind may have with another”  ~Robert Barr 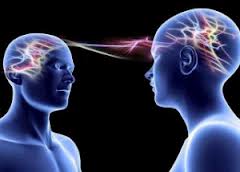 Telepathy is an extra-sensorial power developed by the human mind.  It is also present in many other living creatures. It can be defined as the ability to communicate information from one mind to another, without the use of additional tools such as body language or speech.

Telepathy is considered as a kind of mystical perception, and often is associated with different paranormal phenomena such as clairvoyance and precognition. It is important to highlight, however, the fact that even though there has been a considerable amount of evidence and scientific experimentation on telepathy, the scientific community does not accept this as a natural power of the human mind.

The energy levels that the human mind is capable of producing, through the scientific perspective, are shown to be somewhat insufficient to allow the information to be transmitted. So how does it happen?

Telepathy is not a modern phenomenon.  There are a very few references about these extra-ordinary capabilities in ancient cultures along with some other paranormal abilities.  One of these is the Bible, where there are many mentions of super–human aptitudes (see: http://humanityhealing.net/2010/08/subtle-bodies-and-the-bible/ ).

Telepathy is an occurrence that may be spontaneous or experimental. Experimental telepathy occurs in the case of clairvoyance, where there was no conscious transmitting agent to which the receiver appears to catch the mental content from.

One often hears of a close telepathic communication between twins, or between intense caring relationships as parents and children. Feelings of strong emotion, such as panic from imminent danger, can travel between the parties and are excellent conductors of telepathic transmission.  Moreover, the distance to the telepathy is not an obstacle between the transmitter nor to the receiver. They can take up a trip telepathic and we usually name this astral travel.

The study of telepathy is considered by the scientific community as a sort of pseudo-science, and most of the critics who are against such research say that telepathy does not have adequate scientific rigor. We cannot fail to mention the fact that just as there are some people who have developed the power of telepathy, there is also evidence of false telepaths. Many times, the desire or the need to want to communicate through telepathy has such power, the person believes autosuggestion. The problem can even be considered bigger as it so happens to many people with schizophrenia, who often have the false feeling of being in telepathic communication with others. It is important to understand that in this particular case, the sender and recipient are the same person.

Four Elements in the Egyptian Initiation I