Medusa: The Personification of Anger and Revanchist Retribution

Medusa, along with her sisters, Euryale and Stheno were daughters of the Titans of the Sea, Porcys, and Ceto. The Medusa (Algol) was the younger, the most beautiful and also the only one among the three gorgons that were a mortal.

It is said that they were very wise, and they served as priestesses to Athena, the virgin goddess of wisdom. But Poseidon, the sea god, forced himself on Medusa inside of Athena's temple. Medusa tried to plead her innocence in the face of the actions of the powerful God, but Athena did not accept her pleas. Recognizing herself pregnant, she became vindictive and spiteful about men. Her deep sadness and grief transformed her into something she did not recognize, and she lost forever her privileges as a high priestess of a Virgin Goddess.

Athena turned Medusa and her sisters in horrific beasts with scaly skin, wings and hair made up of coiled snakes. Medusa was the only mortal. All those who were caught looking at her, or looking into her eyes, became petrified. Her bitterness and resentment were induced Medusa to live in an isolated cave where she was later beheaded by Perseus.

Two distinct beings came into existence from this creature: Chrysaor and Pegasus; Medusa's children were born at the moment when Medusa was beheaded. Chrysaor has this name because he was born with a golden sword. He was also the father of Echidna, the terrible monster that was half woman, half snake. Pegasus was a winged horse that Bellerophon accompanied on his adventures.

"Anger is an acid that can do more harm to the vessel in which it is stored than to anything on which it is poured." ~Mark Twain

Medusa was tragically lonely; she could petrify anyone with just a glance at her countenance. She could take a life with the movement of her eyes and also could not be seen from the front because it caused the adventurer to be petrified as a standstill. The blood that dripped from Medusa was collected by Perseus. The duality of her veins produced two different substances; the left vein expelled a powerful poison; the right vein in contrary produced a medicine that would raise the dead. Ironically, Medusa kept inside herself the medicine of life, but did not know how to use it, and instead chose to instill the poison of death.

Medusa is the symbol of the scorned and despised woman, unable to love and be loved. She hated men in the figure of the god who seduced her and later abandoned her. She also hated women, as she saw herself be transformed from a beautiful woman to a terrible monster. Her condition is the result of a monster of vengeance; the fault of a man-god and a goddess woman. Medusa is owned by her unhappiness, and her children are neither human nor gods.

The archetypes of the gorgons are symbols of the enemy to be fought; the three forces that pervert the instincts of the human being: sociability, sexuality and spirituality and are the monstrous deformations of the psyche. The difficulty in perceiving this image in itself brings the doubt that plagues much of our humanity: Who am I? The big question that most never ask is: What am I not? 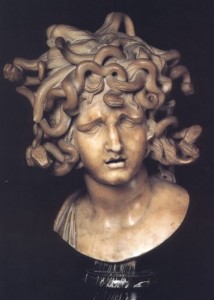 Unable to show a positive image, people make many mistakes in life aligning different possibilities to build their monstrosity:  such as the children of Medusa, who inherit the mother's monstrous figure, while also being children of a God. In Pegasus, we see this characteristic in two different ways: the source and wings, symbol of poetic inspiration which represents fertility and spiritual creativity. Pegasus represents perhaps the best side of the Medusa, which was hidden and could not be seen because it represented the spiritual drive stalled, but Pegasus is the symbol of the spirituality in movement.

With the use of a distorted self-image, some people act like children of Medusa but do not see themselves as they are, and always imagine much worse than they could be. Some authors say that the self-image originates in the look that a child receives from a mother. The way a child is looked upon and seen - with perceived rejection or approval, is captured in the mother's gaze. They are like the sad children of Medusa who cannot see themselves and also cannot be seen by her. It is the mother who gives affection to her son and the looks that can paralyze.

Medusa embodies the personality with structural depression; this type of attitude does not generate happy children, just heartbreaking. Medusa does not look, does not caress, does not guide; just paralyzes.

It is no coincidence that the feeling of depression expresses itself through inertia, through loss of vitality. As if turned to stone by looking at the mother, they who consider themselves children of Medusa can wander through life without mirrors to reflect their real image.