Perseus: The Personification of Courage

"Life shrinks or expands in proportion to one's courage."

Acrisius, king of Argos, was the father of Danaë, a beautiful girl, but was disappointed not to have a male child. When he consulted the oracle about the absence of a male heir, he received information that he never would produce a son, but in the future, he would have a grandson, whose destiny was to kill his grandfather.

Acrisius took extreme measures to try to escape his fate and had Danaë isolated on top of a bronze tower. She remained in complete seclusion until one day Zeus came to visit her in the form of a shower of gold. Danaë gave birth to a male child: Perseus. Acrisius could not believe and still hoped to avoid his fate. He ordered a large chest to be made; he proceeded to place Danaë and her son inside, locked it and cast them into the sea. Zeus asks Poseidon to calm the water, and Danaë and Perseus can survive.

Hurled by the waves, the ark ended up on the beach of Seriphus (Seriphos), one of the islands of the Cyclades. Danaë and Perseus were cared for by an honest fisherman, Dictys, brother of the king of Seriphus, Polydectes, who was an unscrupulous man. Over time, Polydectes fell in love with Danaë, but Dictys protected Danaë from attacks of the king while Perseus was growing up.

One day, during a banquet, Polydectes asked gifts to be given to him by his guests. Some promised to give him beautiful horses, others offered jewelry and other artifacts, but Perseus offered to bring him the head of the Gorgon Medusa. Everyone who had promised to the king had to honor and fulfill the promise to him. Polydectes accepted Perseus ‘offer thinking that would be the opportunity to get rid of Perseus and have his mother Danaë seduced.

The gorgons were three-winged monstrous creatures with meandering hair. Two were immortal, but Medusa was the mortal and the potentially vulnerable one. Medusa, however, had the power to turn into stone all that looked into her eyes. 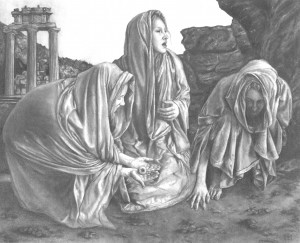 The God Hermes showed Perseus the path of the Graeae, the three old sisters who shared one eye and one tooth between them and, coached by Hermes, Perseus was able to grab their eye and their tooth, refusing to return them to the Graeae unless they showed him the way to the Nymphs; who could give him everything he would need to deal with Medusa.

The Nymphs gave Perseus a cloak of darkness that would catch the Medusa surprise, winged boots to facilitate his escape and a special bag to put the head after it had been severed. Hermes gave him a scythe, and so Perseus went to find Medusa.

Finding where she was hiding, Perseus was able to see through his shiny shield her movements, avoiding having to look at her, and when she approached, Perseus attacked and cut off her head. From the blood of the Medusa’s head, the mythical Pegasus was born.

Putting the head of Medusa in his bag, Perseus quickly returned to Seriphus, aided by his newly acquired winged boots.

But while flying over the coast of Ethiopia, Perseus saw a beautiful princess tied under a rock. The Princess was Andromeda that was being given as a sacrifice to the Kraken because her vain mother Cassiopeia said that she was more beautiful than the daughters of the sea god Nereus. This statement apparently raised the ire of Poseidon.

To punish her, Poseidon sent a sea monster to ravage her kingdom, and this could only be avoided if a royal sacrifice were offered. So, the queen's daughter, Andromeda, was placed on the waterfront to wait for her terrible fate. Perseus killed the sea monster and freed the princess. 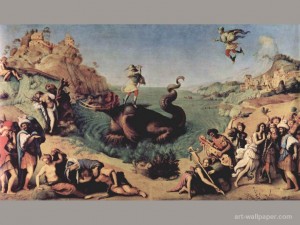 Her parents, in jubilation, offered Andromeda to Perseus as his wife, and the two went on the journey to Seriphus. Polydectes could not believe that Perseus had accomplished what was promised, and when he insisted on seeing Medusa's head, he looked into her eyes and became petrified under the gaze of the Gorgon's head.

Perseus, Danaë, and Andromeda continue their journey along to Argos, where they hoped to reconcile themselves with the old King Acrisius.

Karmic Relationships: Finding the Balance Within

When the king Acrisius learned of the visit of his daughter and grandson, he fled the looming presence of his grandson, going to Thessaly.  Fate, however, made them meet at the funeral games of King of Larissa. They did not know, and when Perseus threw a disc, it veered and struck Acrisius among the spectators, killing him. The prediction of the oracle became reality.

The myth of Perseus and Medusa represents the battle against our inner sacred fears. These are fears that we carry in us and that we refuse to acknowledge and to address them with the hope that we can outrun them until, unconsciously, we attract situations that put face to face with those fears.

It is well known that whatever we do not recognize and address, inevitably will be attracted into our lives, by the Law of Attraction - it is often what we preoccupy our minds with and what we fear the most that we manifest.

We all have some fear: fear of losing, fear of not being loved, fear to love and not be reciprocated, fear of the dentist, fear of mice, etc.  To tackle any fear, at any level of our being, we need courage and the internal decision not to be afraid of our fears. The secret lies in ourselves: we must look fearlessly inside and also outside.

Every detail of our face, our body, is like digital imprint; there is no one else like you in the entire universe. We should not fear to be alone, of having only our company. We need to try new things, new flavors and give ourselves new opportunities. We're perfect; do not need to be afraid, because the courage is also alive in each and every one of us.

Archetypes help us understand our internal journey.  Courage is not the absence of fear, but the ability to move forward despite the fear: walking forward to face adversity. We cannot accept defeat, surrender due to concerns. Otherwise, we will never come to know many paths, and manifest many dreams that we long for in our lives.