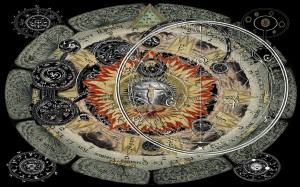 Jung According to Carl Jung, the Greek gods and all the myths that surround them are archetypal symbols that pertain to our collective unconscious. In other words, they are the deep motivational unveiled factors that are shared by all humankind.

Your vision will become clear only when you can look into your own heart.
Who looks outside dreams; who looks inside, awakes. ~Carl Gustav

Since the planets are named after these archetypal godly forces, they carry in themselves the influence of symbolism that such archetypes have. According to Jung, these symbolic realities can interact with the events of our lives through processes called synchronicity and serendipity, which justifies as the physical reason for the magical tools of Astrology.

Represented by Apollo, son of Zeus, the sun was associated with strength, purity. The light of the sun that killed the serpent represents the cold of winter disappearing before your shining bright. He governs the seasons, was the god of agriculture and livestock keeper. His movement through the heavenly sky also determined the seasons of growth or rites of passages of the transcendent human nature. His beauty symbolizes the human being in its highest form and, therefore, ruler of the sign of Leo

Represented by Selene, daughter of the Titans in Greek mythology; she was considered feminine even when the Albanians and the Phrygian examined the moon masculine and was ruled by a high priest, and was associated with chastity, virginity, and motherhood. The Moon is the ruler of the sign Cancer.

Represented by Hermes, the messenger of the gods, Mercury was associated with trade, travelers, and communicator. It expresses the abilities of excellent articulation in trading, the spoken and written words and the speed of movement. Because of these, he is the regent of the signs of Gemini and Virgo.

Represented by Aphrodite in Greek mythology, the goddess of beauty and love, Venus was associated with sexuality, sensuality, lovers, fertility and creation The planet Venus was chosen to incorporate itself as the ruler the signs of Taurus and Libra.

Associated with the god of war in Greek mythology, Aries, Mars was related to the strength to fight, courage and battle, and therefore ruler of Aries and the ancient ruler of Scorpio.

Associated with the god of gods in Greek mythology, Zeus, Jupiter traditionally dominated everywhere within its radius. It protected crops of grapes and was related to oaths, treaties and older styles of marriage. It is the symbol of the father figure and it is said that the rays that originally reached the Earth came directly from him. These magnificent rays were considered the symbols of his majesty. It is the ruler of Sagittarius and the ancient ruler of Pisces.

Associated with the god Chronos in Greek mythology, Saturn was associated with parenthood. The most entertaining Roman feasts were celebrated in honor of Saturn: the Saturnalia. It was a primordial Festival, equivalent to the Western celebration of Christmas, which received its powerful influence.

During the Saturnalia, they exchanged gifts, freed prisoners and slaves were served by their owners. Saturn was traditionally considered the son of Uranus, which after castrating his father, became the supreme Lord of the earth, ruling a golden era of love and innocence. It is the ancient ruler of Aquarius and the exoteric ruler of Capricorn. 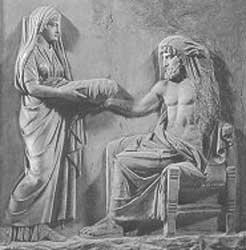 Uranus represented higher vibrational aspects of Heaven and was the progenitor of the incestuous human species. Among his children, we find the Titans. It is assumed that the myth of Uranus is pre-Greek, probably Hittite. Uranus is the ruler of Aquarius.

Neptune was originally an Italic god of fresh waters and later was associated with Poseidon, known as the god of the seas. With the trident, Neptune ruled over the ocean water. Neptune was the god of sailors and protector of all who traveled by sea, and therefore ruler of Pisces. Because it reigns over the deep waters, it also shared aspects related to unconscious minds, ecstasy, and escapism

Pluto is one of the many names of Hades, god of the underworld, and son of Kronos. Originally destitute of qualities of mercy and compassion, the God of the dead adorns himself with spruces, cypresses, and narcissus flowers, but does not get moved before worship or sacrifices. He holds the key to the underworld where he rules and is, therefore, the ruler of Scorpio.

Hades was worshiped as one who bestows wealth with his power.

The Hero Journey and the Archetypes of Change