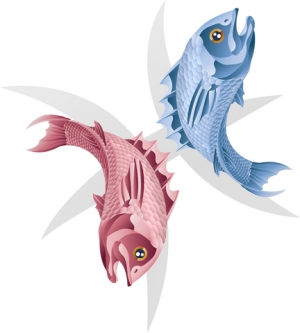 The Twelfth Holy day dedication, on  January 6th and the solar month of March, February 19th to March 20th, is to the Hierarchy of Pisces. This Hierarchy works to bring into manifestation the principle of unification throughout all Creation. Ralph Waldo Emerson gave a perfect Piscean inscription: "The Imperfect adores my own Perfect. Life is no longer a thing of shreds and patches, but a glorious divine unity."

The Zodiacal Hierarchy of Pisces

Pisces is the last sign before the birth of the Spiritual New Year, a period of recapitulation and self-examination. It marks the sunset of a past life and the sunrise of a new life.

The cosmic pattern held above the earth by this Hierarchy is one of perfected humanity, created in the image and likeness of God and manifesting the Divine within oneself. Godlike Humanity is the keynote of Pisces, as it is also the cosmic pattern of Aries. In fact, the perfecting of humanity is and has been the Divine labor of all twelve creative Hierarchies since the beginning of human evolution. When it comes to its ultimate completion, it will be under the ministry of the Piscean Hierarchy.

Peter is the Disciple, who correlates with Pisces.  Peter the unstable, the "wave" man who, after he had awakened the Christ-consciousness within himself through his faith, became the Rock of Initiation on which the church was founded.

The dual body center correlating with Pisces is the feet.  In the human race at large, this center is yet to be awakened. In the vision of Fatima, the children described particularly the beautiful roses blooming upon the hands and feet of the Blessed Lady.

This body made in the image and likeness of God will be luminous with scintillating stars, or flowers, awakened within its vital centers. This glorified body is the golden wedding garment described by Saint Paul as the glorified celestial body. It was his vision of this luminous vehicle in the Memory of Nature which inspired him to declare in exaltation that man is "little lower than the angels"; and it doth not yet appear what he shall be.

The biblical seed thought for meditation on the Twelfth Holy day, January 6th while the vibratory rhythms of Pisces pervade the earth, and during the solar month of March, is:

During the Twelve Holy Days between Christmas and Twelfth Holy Night, the Earth is enveloped by the Light of the archangelic Christ. The fragrance of His transcendent aura permeates the planet with a rare perfume, like an intermingling of the breath of fairest roses and purest lilies. The radiant Light and Healing fragrance are gradually absorbed by the Earth during this sacred interval, making it an ideal time for soul dedication to the Path of Holiness.

To participate with the Self-Intunement, visit: Affirmations of the Signs – Pisces in the Humanity Healing Community.

This information above is  available at the work of Corinne Heline, New Age Bible Interpretation, Vol. VII Mystery of the Christos: The Twelve Holy Days. ISBN 0-933963-07-6