People are deprived of warmth with an enormous need for affection, do not support proximity, since they do not trust anyone; they do believe they can’t be loved and most of the time they feel like monsters. They usually talk about busy moms, vain mothers and their resentfulness from the loss of beauty due to pregnancy. They are the “monsters” whose creativity needs to be released and need to find a mirror that will tell them who they are, or at least what they are not.

Medusa's death results in a free life for Pegasus; he wins the heavens, freely released, symbolizing the victory of intelligence, in union with spirituality. The sensitivity that had always existed, nevertheless in what was thought originally to be a monster.

When one clings to the ordinary human aspect in riots of useless misplaced revenge, one cannot understand one’s tragedy and is unable to forgive oneself. When one can reach the condition of Pegasus, one will realize the source all the beauties, of pure elevation, creativity, and loyalty. It is not by chance that Pegasus symbolizes poetry and beauty.

When only incorporating the animalistic side, however, the individual tends to go through life without belonging to anyone. It can be manifested as a man of many women but no one to love. This man, once petrified by the looks of the mother will be inert, developing paralytic disease symptoms with fantasies of self-punishment. This individual can become tragic and joyless, or attempt to overcome their pain through the gathering of power and money. Conversely, one can have everything and at the same time continues to feel nothing. He cannot have a loving woman because he internalized the female image as a monster that petrifies, and when he finds it does not trust her and aborts all the possibilities of getting the love that could rejuvenate him.

A woman who sees herself as the daughter of Medusa shows the impossibility of being loved. Even though beautiful, she is a tragic figure doomed to be an eternal child stuck into the form of the mother or also becomes a mother monster. The mother gives her what she feels for the men, rape, and abandonment, and thus this woman realizes that the man in your life can be treated as a toy or as a source of suffering. And she often joins cruel men who will justify the idea of the mother: the impossibility of being happy with men. And when you find true love, destroys love with the man she thinks she had loved.

Women that experience unhappy love situations tend to inherit the terrible Medusa’s look. In their unhappy marriages, they tend to give birth to unhappy children, prisoners that they tend to carry with them, not by love but by the terror they can generate. Many of these kids will not be able to experience pure love and develop the trend to practice love as a toy or using their actions to paralyze people. In the myth, the woman, Medusa, transformed herself into a monster due to the carelessness of a God (man) and from the cruelty of a Goddess (another woman).

The Medusa was beheaded by Perseus. He also had a tragic life story, because he was along with his mother Danaë were thrown in a chest and thrown into the waves of the sea by the grandfather of Perseus. However, the mother of Perseus was a loving, warm influence and transmitted those virtues to her son. 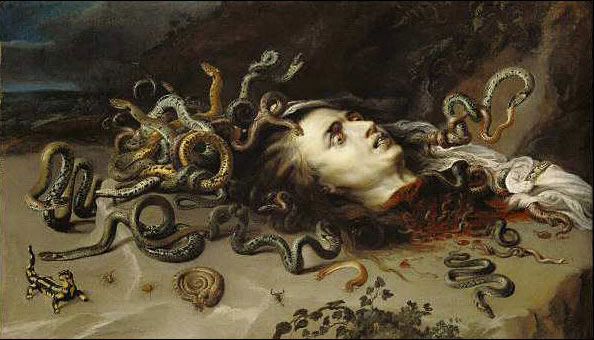 Despite the abandonment and rejection perpetrated by her father, Danaë did not turn it into a hater of masculinity and did not transmit it to her son. They did not allow his misfortune to turn into resentment of humanity at large. Perseus showed the mirror to Medusa for her to find out what was she creating and expressing to the world and through his hands, Pegasus was released.