“The rude sea grew civil at her song, And certain stars shot madly from their spheres To hear the seamaid's music.” ~William Shakespeare

The orbits of debris are approximately elliptical, with the Sun at one focus. As the distance of the debris from the Sun is in general enormous, the curvature is small, and the trajectories can be considered approximately parallel.

The fragments are usually entering the atmosphere at high speed and combust, forming the so-called shooting stars or fallen stars. Meteor showers are annual periodic phenomena. The best known are the intense Leonidas and Perseids.

Any planet in the solar system with a reasonably transparent atmosphere can experience a meteor shower. Mars is known to have meteor showers that occur with different intensity and very distinct characteristics as of from Earth. 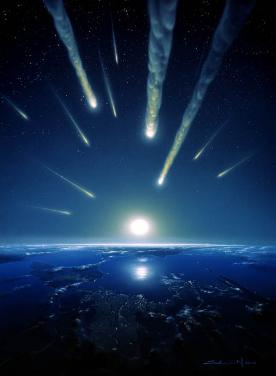 Esoterically, the meteor showers function as a temporary immersion of very specific energies originating from massive cosmic archetypes, such as the planets, constellations, comets and from inter-planetary regions of the solar system space.

The decoding of these showering elements can be easily found in mankind’s tales and ancient mythology. They are personifications of the original adamantine evolutionary templates and withhold characteristics that facilitate the understanding of our cosmic multidimensionality. These traveling energies, such any other cosmic event, bear influence in our common lives on this planet and influence how we progress as a race; as they represent the opening of windows of opportunities to facilitate the soul growth and soul works, especially from star-seeded souls.