Collective Karma is a type of group Karma. This concept refers to a phenomenon where a group of souls bounds together by means of karmic ties.  In their case, the Karma works through matching vibrations.  Individual karma is the shared denominator between the various collective karma that may influence us all the time, from the time before we were born, until and may accompany us after we die. This is not a notion initially derivative from Buddhist Doctrine, but the Theosophy of Helena Blavatsky (d.1891) in her, “The Key to Theosophy,” 1889, makes reference to what she called “National Karma.”

The idea seems to have subsequently been taken up by many believers in the occult, then absorbed into New Age.” [1]. It appears that the collective karma is imposed on us by inheritance, depending on the family to which we belong, the place where we were born, our nation, city, neighborhood, ethnicity, religion, etc. Or by choice, as a sport, profession, art, politics, philosophy, and others.

Collective Karma forms a type of “karmic pocket”, each collective karma has a "gravitational" field that draws us into it, we can say they work through much more palpable energy, called an egregore; an idea little-discussed regarding spirituality, but no less real.

These are souls who through the law of attraction and personal karma, participated in natural disasters, torture, death, deprivation, war, or suffering of any circumstance together. The Collective Karmic cycle would usually begin with a remarkable event in the life of these spirits that generates much suffering.

Earthquakes and typhoons are all-natural disasters. In the Dharma, they belong to karmic consequences arising from collective Karma and deeds by sentient beings. The Buddhist scripture tells us: “Greed, anger, and delusion being the world’s three poisons, the Buddhas said explicit words to expel them all.” These poisons are so bad that they hurt human health and break the roots of good karma. On a larger scale, they even wipe out enlightened lives and affect the environment with the earth’s ecology.

This pain is part of their minds and into the spiritual world creating a vibrational circle; after the collective death, they may be still vibrating in the frequency of suffering they went through. We should clarify that "The Collective Karma" is a collection of individual karmas. Each of these must-have its individual fruition. No man necessarily shares the karma of others of his national or another group simply because of being one of that group. He is responsible only for his own particular share in its deeds.

The spirits trapped in the karmic pocket are not capable of becoming detached from a karmic situation with similar karmic frequency. This way they may remain vibrating together in contact with each other at that same frequency and that on some occasions can extend themselves for thousands of years. The karmic pocket is communal prisons for spirits. They bond together in space-time to traumatic events.

We must say that the spirits are not automatically locked into pockets. The cause of the "arrest" is almost always an attachment to the traumatic situation. Their connections exist because of feelings such as anger, bitterness, resentment, guilt, disgust, sadness, etc. A spirit can live all these and other legal situations and not attach to a karmic pocket. For this is necessary to cultivate feelings such as forgiveness, love, and understanding.

However, karma as a law is very subjective. There is a need to have an agent, a force that makes sure the law is enforced. In the case of human law, the legislature, who enforces the Judiciary. In the case of Collective Karma, the force that allows the proper functioning of the mechanism is a power called the egregore.

Don't underestimate the complexity and the organizational capability of the universe. We are born in a certain place according to our karma. It kind of makes sense our family members, neighbors, countrymen share a part of our karma. They are part of the same karmic circle - at least to a certain extent. If you have done bad things, you will be in a bad place. Other people who have done bad things may join you there.

On the other hand, not every agglomeration of spirits belongs in negative pockets of karmic residue. There are communities of high spirits that keep positive karmic ties, love, and brotherhood. 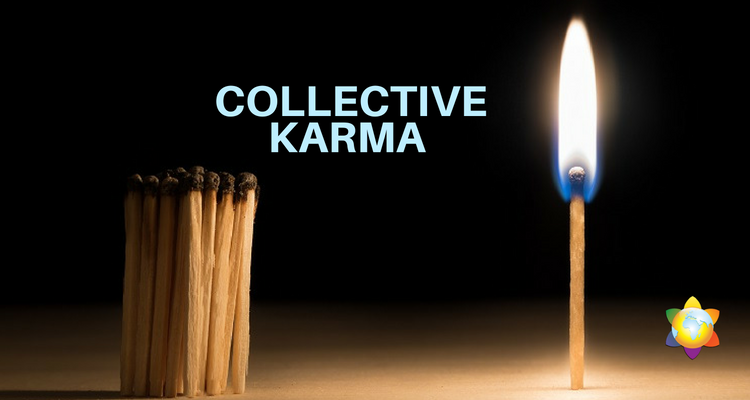