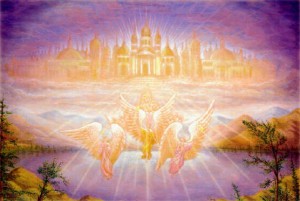 "May I quickly take birth in Shambhala, the treasury of jewels,
And complete the stages of the path in Highest Yoga Tantra."
From 'The Guru Yoga of Kalachakra' by Ling Rinpoche

According to the Kalachakra tantra teachings, a line of enlightened kings is said to be guarding the highest wisdom for a time when all spiritual values in the world outside will be lost in war and destruction.  Then, according to prophesy, a great king will come out of this sanctuary to defeat the forces of evil and establish a golden age.

Shamballa, as it constitutes the synthesis of understanding where our Earth is concerned, is also the center where the highest Will of the Solar Logos is imposed upon the Will of our planetary Logos, Who is, as you know, only a center in His greater body of manifestation. With this item of information you can have no possible concern; the Masters Themselves are only learning the Will of the planetary Logos; the objective of effort in Shamballa is, however, the apprehension of solar Purpose, the Plan of which is working out on the highest levels of our planetary system, just as the Will, Purpose and Plan of Shamballa work out on the three lowest levels of our planetary system. Again, this item of information serves only to indicate hierarchical objectives, and those objectives extend away from time and space into the Mind of God Himself.
( Alice Bailey "The Externalisation of the Hierarchy", p.pp. 533-5) 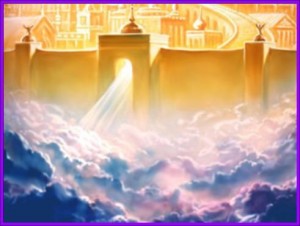 According to legend, somewhere in the northwest region of Jambudvipa lies a land called Shambhala. This is a magical land which is shaped like an eight-petalled lotus flower. It has been ruled by priest-kings for many thousands of years; in fact, the legend of Shambhala predates the introduction of Buddhism into Tibet. In the aboriginal Bon religion, Shambhala is known as Olmolungrung, and is based on the square instead of the circle.

Shambhala forms a gateway between the physical and spiritual realms. It is endowed with riches, and is ideally suited for the habitat of enlightened souls. They are not attached to the fruits of karma, and are but one step from Buddhahood. This is the realm to be sought for rebirth if one desires the swiftest path to nirvana.

In the Tibetan Buddhist version of the apocalypse, barbarians will overtake the earth at the end of the Kali Yuga, the present age. It will be necessary for the king of Shambhala to join forces with the gods to wage war on the barbarians. At this time, armies will be sent forth from the city, the location of which has been kept secret for millenia. Order will be restored on earth, and the wisdom which Shambhala has been holding will be dispensed to the peoples of the world.

The City on the Edge of Forever
by Aaron Ross