72 as a number is known, in esoteric numerology,  to be one of the master numbers. By definition, a master number is one that encompasses patterns that replicate the frequencies and vibrations of certain energies of the manifested Universe.

We can find the reference to this numeric vibration in many of the ancient texts:

The number 72 is used four times in the Bible.

In the Bible, 72 numbers written in their cardinal form are multiple of twelve.

There are seventy -two races resulting from Noah. There are fifteen descendants by Japhet, thirty by Cham, twenty-seven by Sem. (Genesis 10)

In the vision of Jacob’s Ladder in the Old Testament of the Bible (Genesis 28, 11-19) and the Zohar, Jacob perceived that there were 72 steps to the Earth and Heaven with angels traveling up and down the steps.

72 were the number of people in Moses’ Council of Jethro.

Seventy -two of the Elders received the outpouring of the Spirit of God from Moses.  The 70 ancients were accompanying Moses plus the two absent ones who had remained in the camp, Eldad, and Medad. (Numbers 11:25-26) 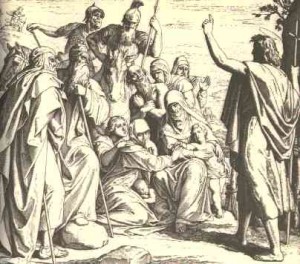 There were seventy -two Disciples of the Christ as well as the 12 Apostles:

“After this, the Lord appointed seventy-two others and sent them two by two ahead of him to every town and place where he was about to go. He told them, "The harvest is plentiful, but the workers are few. Ask the Lord of the harvest, therefore, to send out workers into his harvest field. Go! I am sending you out like lambs among wolves.”
~Luke 10:1-3

“The seventy-two returned with joy and said, "Lord, even the demons submit to us in your name."
~Luke 10:17

In the Gospel according to Philip and in the Gospel of the Childhood of Jesus, it is written that one day, while he was youth, Jesus entered in the dyeing of Levi. He took 72 colors and threw them in the cauldron. Then Levi was in anger, but Jesus "take out them all white and tells: It is thus indeed that the Son of the Man comes as dyer".

According to the visions of Ann-Catherine Emmerich, after his temptation in the desert, Jesus is served by 12 superiors’ angels and 72 angels of less rank.

According to the Rule in The Order of Saint-Saviour, given by the Christ to Saint Brigitte of Sweden, who lived from 1303 to 1373, the number of the members of the convent could not exceed 72: there had to be at the most sixty sisters and no more, accompanied by four deacons and eight laity.

The seventy -two Instruments of Charities of Saint Benoit given in his rule on the spiritual art governing the monastic existence.

The name of God is composed of seventy -two letters according to the cabalistic tradition. It comes from the mystical text (called Schemamphorash) of the Exodus, chapter 14 verses 19, 20 and 21 of which each one is composed of 72 letters in the original Hebraic text. It is this ineffable name of God who murmured the great priest in the middle of the shouts of the crowd. It was replaced later by the sacred named, YHWH, than cabalists pronounce by spelling them one after the other: Yod, He, Waw, He. It is also by extraction and transposition of the three verses of the Schemamphorash that cabalists deduce the names of the 72 spirits (or angels) of the Cabal which they call the "explained divine name."

According to Midrash, it is said that the Hebrew language was intentionally designed by "Seventy-two Scholars" so that words and phrases in the sacred texts having similar spiritual significance would have identical Numerations. The "Scholars", being seventy-two in number correspond to the seventy-two letters of the Great Divided Name of God: Shemhamphorasch.

According to the Zohar, there were seventy -two old men of the synagogue.

Seventy -two is also the conventional number of scholars translating the Septuagint, according to the legendary account in the "Letter of Aristeas".  The 72 Jewish translators (six of each tribe) that Ptolemy II, king of Egypt (283-246 before J.-C.), asked Eleazar, great priest of Jerusalem, to send him to translate into Greek the books of Moses, written in Hebrew, for his library in Alexandria. It is the oldest Greek version of the Old Testament written in Hebrew. It is designated under the name of Septuagint because according to a legend these 72 translators would have produced separately the same translation without consulting each other and this in 72 days. This translation is recognized officially by the Church as well as the Vulgate.

The Mahomet Prophet suggests to begin and to finish the meals by the salt because it is a remedy against the 72 sicknesses.

The number of virgins a Muslim might get as a reward in Heaven.

The good God Osiris was enclosed in a coffin by 72 evil disciples and accomplices of Set.

There were 72 disciples of Confucius.

There are 72 Immortals in Taoism.

The 72 companions of apotheosis of Houang-ti.

The number of devils according to The Lesser Key of Solomon.

Plato, in his work “The Republic” talks about the number 72 being a nuptial number or a number that expresses the marriage between Heaven and Earth.

Plutarch speaks of the existence of the five days that the god Hermes added to the circumference, or to a year of 360 days; He would have taken 1/72 of each day to be added to the total.

The Assyrians, Chaldeans, and Hebrew civilizations always counted over their “Magic Calendars” the presence of 72 Tutelary Angels.

The axis of the earth moves of one degree every 72 years compared to stars and the vault of heaven.

72 years corresponds to one day of the Pythagoric year  - mitacomesis  360 X 72=25920 years or an entire cycle of the Precession of Equinoxes.

There are much more, but as you can see, there is a fantastic list of significance when it is related to the vibratory signature of the number 72.