Sacred Geometry is the blueprint of our Universe. The Ancient Philosopher Plato used to say that God didn't create, he "geometrized."When we think about the movement of the stars, the astrodynamics of the heavenly bodies, we immediately feel an attraction and fascination:  a natural desire to learn more or even to become an active participant in this Cosmic Dance. This is due to the Law of Resonance that permeates all the parts of the Universe. We are attracted to interact with All That Is, even when we are not completely conscious of it. The simple recognition of this “attraction” leads us to the observance of all aspects and forms of manifestation in this universe and the way they relate and interact with each other under the inspiring orchestration of a very skillful Maestro.

These geometric structures, even when differing in shape, frequency and vibration; can be perceived as being created with the same fundamental base: the underlying principal that created and maintains the cosmos.  It is the same dynamic that conceived the galaxies, stars, and planets; and it is the same that builds human bodies and regulates the cycles of life on earth – birth, growth, maturity and death.

These are all manifestations of different series of geometric proportions, or shapes.  They are also a base for the architectural and functional structure of the life. This is an axiom that is valid from the microcosms of subatomic particles to the most distant galaxies of the Universe.

“The Symbol is the Ideological manifestation of the mystical rhythm of Creation, and the degree of veracity given to the symbol is the expression of the respect that Mankind can concede to this Mystical Rhythm.” 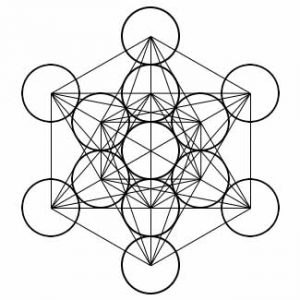 As part of the Stellar Code™ program, a  multifaceted resource of energetic tools is provided to the Seeker that ables him to transmute the subtle matter into the concrete matter and vice versa.  Through the Attunements of the program into the energetic body and with the help of Sacred Geometry frequencies, one can capture the essence of the Divine, the sense of eternity, and the understanding of the completeness and Oneness of Creation,  while still existing on this plane of existence.

The Spiritual Exercises which are part of the Attunements of the Stellar Code™ were designed to embody relevant elements of Sacred Geometry. Through the understanding of sacred forms, we create the possibility to access and to perfect all the forms representative of the Divine through the perceptive acceptance of the “mechanical’ aspect subjacent to the process of creation and continuation of the Universe as we integrate ourselves more fully into this continuous flow.

As one integrates the progressive attunements into the personal energetic matrix, which in itself is a construct of Sacred Geometry, one is able to harmonize more easily with all the structures of creation and its influx of energies.  One becomes proficient in the art of absorbing the right energy wave and applying it accordingly with the proper timing. This is not a new skill: it was one lost in the sands of time, but nonetheless it is part of the birthright of Humanity.

“To utilize Sacred Geometry is to imitate how the Divine Creates.”

Through the integration of the symbols of the Divine Creation, we open ourselves to an opportunity to “perform” and co-create with the Universe using our hands and consciousness. This brings humanity to a new level of understanding of its purpose as an important auxiliary resource of the Divine through ALL THAT IS.