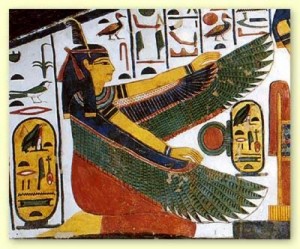 Do you know the ordinances of the heavens? Can you set their dominion over the earth? ~Job 38: 33

Lyra[1] or lyre[2] is a type of the antique musical instrument.  The Lyra constellation is positioned on the west side of summer's Milky Way around the zenith, and is formed with tiny triangle and parallelogram. This constellation is in the shape of the lyre of Orpheus, given to him by his father, Apollo. Apollo gave Orpheus the instrument when only a child and the Muses taught him to use it. Thus Orpheus became sort of a Bardo[3] . It is said that when he sang and played his harp, even Mother Nature in all her manifestations and embodiments, stopped to listen, captivated by the melody and the lyrics.

In the most prevalent description of Orpheus death, the female followers of Dionysus, or Bacchus, the Maenads, or the Bacchantes,  tore Orpheus from limb to limb from jealousy because he was still morning his wife. His head was thrown into the river Hebrus, where it floated to Lesbos. Legend said that it kept singing the entire time until it reached its destination. Orpheus is identified with the Swan (Cygnus) that even in presence of death; sings its most majestic song.

The lyre of Orpheus was also thrown into the river, and it too floated to the island of Lesbos and beached near the temple of Apollo. Apollo then convinced Zeus that the instrument should become a constellation. Zeus agreed and placed the lyre of Orpheus between Hercules and Cygnus. 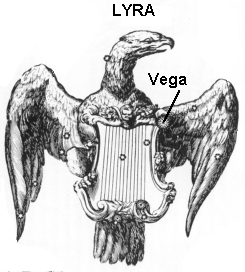 In this mystic constellation, the leading luminary is the beautiful star Vega; a very bright blue star that is inferior in magnitude only to the star Sirius and the star Arcturus. Its name derives from the Arabic name of the constellation, al-Nasr al- tvaki, or Flying Vulture, which was contracted to Waghi, Wega, and, finally, Vega.  Vega was the northern pole star around 12,000 BC and will be so again around AD 13,727.