The Divine Logos uses the heavens as His universal communication board. In many ancient texts, we see expressions of change and the “signs of the time” expressed through references to the movement of the stars, and the sun and the moon.

And God said, "Let there be lights in the expanse of the sky to separate the day from the night, and let them serve as signs to mark seasons and days and years…” ~Genesis 1:14

They are the Voices of this Heavenly Choir that sings the Harmony of the Spheres in its multiple frequency signatures. These energetic signatures are what we call the Stellar Codes™ and the attunement process harmonizes the individual’s energetic template with these signatures.

The Divine Mind speaks through the language of the stars; Many times these syllables pass through our conscious mind, and they are not perceived or understood. To comprehend the works and blessings from the Divine Mind, we first have to understand and relate to the language He speaks.

“And there shall be signs in the sun, and in the moon, and in the stars; and upon the earth distress of nations, with perplexity; the sea and the waves roaring; Men's hearts failing them for fear, and for looking after those things which are coming on the earth: for the powers of heaven shall be shaken.” ~Luke 21:25-26 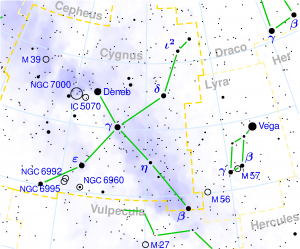 One story tells us that Cygnus represents Orpheus, who was changed into a swan at his death and placed beside his magic harp (Lyra) in the sky. The tail of the swan is marked by the bright star Deneb, Arabic for "tail." Three fainter stars cross the line between Deneb and the head of the swan, Albireo. Cygnus flies southward along the summer Milky Way and into the Summer Triangle. Cygnus is also sprinkled with a variety of nebulae, including the North American Nebula and the Veil Nebula.

Cygnus, together with other avian constellations near the summer solstice, Vultur Cadens, and Aquila, are a significant part of the origin of the myth of the Stymphalian Birds, one of The Twelve Labors of Hercules.

In ancient times Cygnus has known less accurately as “The Bird” and variously associated with hens, pigeons, and eagles. Much of our understanding of the star comes from Roman mythology, where it is identified with the figure of a swan placed in the sky by Jupiter, in gratitude for its form which he took to seduce the unsuspecting Leda. 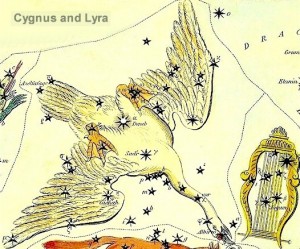 Manilius claimed that from this constellation shall flow a thousand human skills. In modern times, we tend to identify these skills as aptitudes that can be developed and activated through specific processes of anchoring the syllables of the stars, along with the practice of specific Sadhanas, or “in-tunnements” and attunements. The objective is to awaken and weave a better connection with the different dimensions of our Higher Self, therefore expanding our levels of consciousness and capability to increase the coefficient for absorption of Light.

Stellar Code™ Cygnus holds the symbols of communication, messages and amplifies the Gifts of Spirit related to Annunciation and premonition. These are gifts that have been permanently bestowed upon you by your Divine Self, but when not in-tuned with its frequencies, these Blessings can just pass right through us.

The Mysteries of Transformation: Butterfly

Cygnus is part of The Lyra Codex, along with the stars Vega and Aquilla, but all of them embody the different aspects of the qualities of the higher frequency Codex. Lyra holds the secret of our original DNA template and the key to human betterment.

Members of the University can access the eBook Stellar Code™ Lyra Guidebook in the Online Resource section of the website.