Theurgy as it Relates to Stellar Code Mastership

The word Theurgy has its origins in the Greek words “Theoi”, “God”, and “Ergein”, “work”, which leads the meaning towards the concept of God’s work or Work from God. Initially, it was a concept used in opposition to Theology, which emphasized the energy of God solely as a pure philosophical contemplation as suggested by Plotinus. Theurgy does not focus on the religious context, nor in the historical and social background of the Idea of God.  Instead, it apprehends the true nature of the Divine that comes from the diverse schools of wisdom and knowledge and the various mystic traditions of all eras.

All major religious traditions carry basically the same message; that is love, compassion, and forgiveness
the important thing is they should be part of our daily lives.
~H.H. the Dalai Lama

In Greece, this initiatory practice existed during all its historic times, from Apollonius of Tyana through Pythagoras, Plato, and Plotinus and the mystery of Eleusis and Samothrace.

Theurgy was created by the school of Neo-Platonism to characterize the higher type of ceremonial rituals that can create phenomena related to the expansion of one’s consciousness.  This is a highly subtle notion, and it was passed through the generations of time as the most simplistic version of being a ritualistic ceremony that evolves and thrives through the communication with Angelic Hosts and Stellar Logos. Theurgy is based on the idea of a natural coexistence between Human beings and Higher Vibrational and Divine Beings.

While the initiation in this art may be contextualized as a historical reference; nevertheless, it has always existed throughout the history of ancient civilizations in many different time lines. Its purpose was to create a ceremony where the objective was to connect with the Divine Mind and evoking its power in perfect resonance and communion with All That Is, or Christ-Consciousness.

This perfected state of communion is achieved through the exercise of ceremonial ritual, prayers, invocations and regular Spiritual exercises. These practices are very much used inside of the Esoteric Christianity School.

The Human comprehension about the nature of the Divine has been developed only in a partial form, through successive approximations and insight. The objective and finite mind cannot possibly fully understand the concept of the infinite Mind of God.  Only through expansion of one’s consciousness and proper training of Spiritual and transcendent intuition can bring one closer to what Theurgy means.

The biggest obstacle to the understanding of transcendental truths is the anthropomorphic conditioning we have received about giving and attributing to God, Human reactions, and feelings, and, in one way, limiting the One Divine Creator in His ways to manifest His works and Consciousness.

Adopting a simplistic way of understanding, Theurgy is an internal manifestation of the Divine Essence through words of power (mantras), prayers, guided meditations and an intense desire (manifested Intention) to be permanently connected with the Divine Mind (Logos).  For those who practice it, Theurgy can reach diverse levels of Human existence; from the psychological plane to the perfect harmony with Creation and its beings. The most interesting effect of these practices, however, is the possibility to transcend the Human nature and commune with Higher Vibrational Beings in different levels of reality.

The modern way to celebrate the Holy Mass is nothing more than a shadow in how to partake through ritualistic procedures of the Body of Christ and the Spirit of God in all His might. The basic motivation of these rituals cannot be anything other than the purity of desire in practicing the spiritual union with God in his diverse ways of manifestations. It requires a necessary attitude of internal reverence, prayer, faith, and pure unconditional love. One must cultivate the state of Nepsis, a powerful and almost unknown virtue of the spirit that allows one to keep a level of control of his consciousness, an inner state of alert vigilance and self-awareness. This is an essential element because it prevents the individual from suffering from self-pity and negative energy attachments. 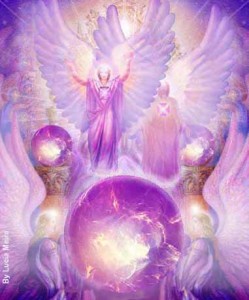 In becoming a Master of the Stellar Codes, one should thrive to develop this skill: to receive and transmit its Divine Light symbols and syllables with a purity of mind and heart. It is necessary to develop an internal posture of Integrity and Righteousness to receive and become a vessel for Divine Grace. Elements such as Respect, Reverence, Gratitude, and Forgiveness are essential to conducting and presiding over these types of ceremonies.

Are You Experiencing Past Life Memories?

In the specific case of the Attunements and Initiations of the Stellar Codes, the alchemy of the Codes operate mainly based on the Cosmic Calendar, perfectly aligned with the Time of Kairos[1], not necessarily of our usual concept of Chronos time. Kairos is the time of the Universe and the internal planes. It can be understood as our internal psychological time. Kairos time is always NOW and manifests externality as the concept of Zero Point.

In reality, the vastness of Divine Mind covers not only this harmonic Universe but many Multi-verses, and throughout Creation.

As we expand our perception of reality, we perceive the harmony in the Divine Order which is so absolute; that is capable of synchronizing all the elements that are not necessarily in harmony; transforming into symmetry all that is asymmetric.

Like turbulent waves that may seem to represent conflict and dissonance; they are mere contingencies of situational movements of Karmic adjustments, apparently dissociated from the Unity, but in the reality of things, this is just an illusion: in the deepest part of the ocean, the calmness and steadiness of God’s eternal love and grace is permanent and unchangeable.  It is this center that one should reach to practice Theurgy.

The essence of Theurgy is to be a method of reverence of the Divine. Theurgy is to open the possibilities of the future, to help assist others in this crucial moment of transition; through the activation of the Christic Principle: the resonance and harmonics with Christ-consciousness and Light, which is our birthright, existing inside of every Human being and is already an element of our Divine Nature.