Hermetic Astrology is the study of the mutations of the soul, the elements of evolution, involution and invisible realms that interact with our common reality. Astrology is a word that originates from the Greek Astron, which means constellation or celestial body. The Greek words astron and aster were both dedicated to denote any shiny light in the sky. Astrology is a spiritual study of the positioning of the celestial bodies and the aspects of their influences in human lives and world events.

~ The Emerald Tablets of Thoth, Tablet 7

Historically, according to the ancient registries, it seems that the Hermetic Astrology we know today started being taught as science, as opposed to being in the realms of the religious context. It was around the third century before the Christian era that the Hermetic Astrology had a preeminent part to play in the formation of a multitude of societies and cultures from the ancient world, such as the Chaldeans, Egyptians, Babylonian, and India (Vedas). It was a form of art and interpretation of the dance of the cosmic and stellar symbols through the evolution of the spirit of Men.

At that point in time, Astrology and Astronomy were considered one and the same and it was studied in the sacred temples as one holistic science. This symbiotic relationship lasted until they start being treated as two different aspects of ways of viewing the configuration of the universe. These distinctions began with Ptolemy and culminated in the XVII century with the definite removal of Astrology from the official programs in universities.

The core beliefs of astrology were prevalent in parts of the ancient world and are epitomized in the Hermetic maxim or "as above, so below". Tycho Brahe, the famous astronomer, and alchemist of the 16th century used a similar phrase to summarize his studies in astrology: "suspiciendo despicio", or "by looking up I see downward."

The word hermetic derives from the esoteric teachings of the Greek god Hermes Trismegistus, the same deity as the Roman Mercury and the Egyptian god Thoth. Hermes is well known to be the patron of the Occult Truth, in the sense that was not yet revealed, and of Science and Alchemy.

While traditional astrology is very much content with making prognostications about life events and relationships according to the aspectations among all the planetary and sidereal bodies of the stars, the ancient and Hermetic astrological teachings were less concerned with developing the potential for happiness on earth as in developing the potential for freedom in heaven. Its main concerns were centered on the evolution of the human soul, not only on the domains of the terrestrial earth but also from other celestial orbs.

Hermetic Astrology understands the movement of the stars as harmonic elements that play an important part in the development and expansion of the human psyche, not as just being a blind game of random occurrences. Its teachings focus on the spiritual emanations of these bodies of light and their Logos, not primarily the electromagnetic influences of their cyclical movements around each other. In the secret part of these teachings, there is the ancient primeval idea that inside of each one of these magnificent stellar beings also resides a Cosmic Temple of the Heart, and that primarily the astrological Hermeticism refers to the "religion of light and the integration cosmic heart systems". 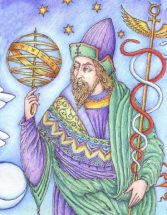 In this way, we can say that through the study of this subject with an open mind; the seeker should be able to harness the influence of the stellar beings and through them understand their very nature, using it to improve its personal pursuit of self-knowledge, self-realization, and awareness. Astrology through the lenses of esoteric teachings reaches dimensions beyond the basic mechanics of the astronomy, which concentrates on the physical explanation of phenomena from inside and outside Earth. The esoteric aspect of Astrology attains a higher ground because the focus of its philosophy on the instruction of the phases, mutability, and alchemizations as stages that every soul must traverse to reach back to its stellar nature.

Hear ye and listen, O my children.
Magic is knowledge and only is Law.
Be not afraid of the power within thee
for it follows Law as the stars in the sky.

~ The Emerald Tablets of Thoth, Tablet 10