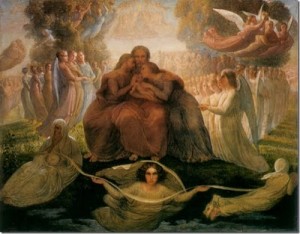 Gnostic Christianity is the body of sacred texts  that reveal facts of the life of Christ and the reality of  his time, that are not necessarily registered in the Christian Bible. Gnosis is a Greek word for Knowledge, and it specifically refers to a form of mystic, revealed, esoteric knowledge through which the spiritual elements of humanity are reminded of their true origins within the superior Godhead, and being thus permitted to escape materiality. "Gnosticism" is a term also used to designate various sects such as the Ophites which appeared at the beginning of the Christian era and who were considered to be heretics by the Catholic Church.

Historically, the Gnostics lived in the three first centuries of the Christian era. It is very much possible that they did not even consider themselves as such, even though they knew the teaching of the “occult word.” Most of these Gnostic communities of sages were organized by early Christians (Gnostic Christianity) and Jews, and also included Adepts from older traditions from ancient Egypt, Babylon, Greece and even Rome.

In the West, the more well-known forms of Gnosis are the Hermeticism[1], the Christian Gnosis, Alchemy and some teachings of the Templars and Franco-Masonry. The Hermeticism branch reached the modern age from ancient Egypt through the tradition of the Tarot Cards.

The Gnosis requires illumination, comprehension and regular practices of contemplation. Finally, it is classified as an intuitive knowledge, perfected through the understanding of the ultimate nature of reality.

For the ancient Gnostics, the “contemplation” stage could only be achieved through a double preparation:

They did, nevertheless, believe that the perfect contemplation of the “Face of God”, or “Beatific Vision,” could only be reached in plenitude after death.

The true Gnostic soul is believed to live in perfect Union with the living God through the works of charity, a virtuous life, and from the exercise of the higher knowledge. A true Gnostic is one that developed self-control over his passions, conquering them to create a peaceful and mindful attitude in daily life, or peace at the soul level.

Gnostic Christianity is a way of life-based on the original teachings of Christ Jesus. The knowledge of the first Christian Gnosis only reappeared during the last twenty years of the Twentieth Century as collections of compiled writings. These discoveries, which include the Dead Sea Scrolls and the Nag Hammadi, include works from early Christianity, which are referred to as “Apocrypha”. These include, among others, the Gospel of Thomas and the Testament of Mary Magdalene. Some Gnostic sects identify Jesus of Nazareth as an embodiment of the Supreme Being who became incarnate to bring gnosis to the earth.

A Gnostic is an individual who believes that salvation is gained through the acquisition of Divine Knowledge or Gnosis. Gnostics recognize that this world was and is subject to powers of darkness that have distorted our concept of reality.

" The world is a place of wounds. Wounds to the spirit
bleed venom in the soul. Staunch the flow of venom into a
poisoned world."[*]

When Gnostics speak of salvation, they mean being freed from these illusions of darkness so that they can perceive Reality. As Jesus, the Christ, said:
"I tell you the truth when I say that only when you perceive shadows as shadows, and search the Light, will you perceive the Reality which is God He also said, "If you continue to acquire gnosis through me and live by the principles I teach, you will be my true disciples. Then you will learn of Truth, and Truth will set you free." (Testimony of St. John 8:31-32)

While Jesus used symbolic parables to motivate his hearers to search for the knowledge of Truth, he privately entrusted to his disciple's gnosis, or knowledge of direct experience with Divinity, which they could share only with those who became their fellow disciples. On one occasion, Jesus said to his disciples,
“It is your privilege to learn the mysteries of the realm of the Eloheim because you have entered the Covenant," Jesus replied, "but to those who remain outside the Covenant, Truth can be shown only in parables. This is because they live in a world of illusions and shadows where Truth is hidden from them. Only the shadow of Truth can reach them until they reject the lie and come into the Covenant of Light." (Testimony of St. Mark 4:10-11, 26-27)

The Persian schools of Gnosis appeared in the Province of Babylon, and they constitute what is believed to be the oldest records of the Gnosis thought process, constituting in itself a body of teachings that had their independent religious context and prescriptions, and which not being derived from the emanations of Christianity or Judaism.

Gnostic ideas found a Jewish variation in the mystical study of Kabbalah. The Kabbalists took many core Gnostic ideas and used them to vividly reinterpret earlier Jewish sources according to this new system. While Kabbalah shares several themes with Gnosticism, such as a multiplicity of heavenly levels, archetypes, and the importance of mystical knowledge and the spiritual experiences of these; it does not reflect the distinctive Gnostic belief that the material world and the Hebrew Bible are the work of an inferior bloodthirsty and malevolent deity. Instead of relating Kabbalah as a form of Gnosticism or vice versa, it would be more truthful to define both Kabbalah and Gnosticism as members of a family of Neo-Platonism/Neo-Pythagorean Eastern mystical traditions.

[1] Hermeticism, or the Western Hermetic Tradition, is a set of philosophical and religious beliefs or gnosis based primarily upon the Hellenistic Egyptian pseudepigraphical writings attributed to Hermes Trismegistus

[*] Christ Aphorism from the Book " GNOSIS MADE WORD" by Phillip Medhurst