The Last Supper is portrayed  in the Bible in two different ways. One of the narrative way, and the other a symbolic way. The Mystical way of interpretation envelops all the emblems and active elements of this archetypal event. Nonetheless, the ceremonial event of the Last Supper brings the  possibility of sharing a new covenant with the Divine realms. 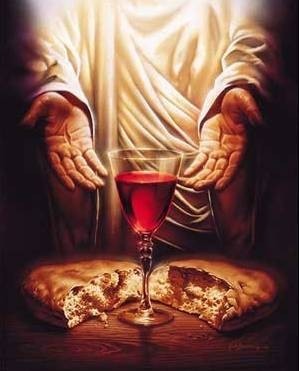 The Lamb of God

In the Bible, with the symbolic episode of the Ten Commandments, when Moses came down with the commandments and saw the people venerating the Golden Calf, he became furious. Moses represents the beginning of new Age of Aries and therefore, in his vision, the “old gods” of the Age of Taurus should have been left behind.

In ancient Greece, gods and monsters and their linking with Taurus were extremely common, including the oxen of Poseidon, the legend of the Minotaur, the archetypical works of Hercules on the capture of the Cretan Bull and the cattle of the monster Geryon.  We can also mention the sacred cows in India, and bulls in Egypt and Rome.  All of them represented the energies of the age or eon.

The Loaf of Bread and Fish

The Christ appeared in another period of transition for humanity, delineating the passage from the Age of Aries to the Piscean era. That is why the symbols of Christ would be both at the same time the Fish (the Fisherman of Souls) and the sacrificial Lamb of God. Esoterically, this would be the expression of the Alpha and Omega, the beginning and the end of a cycle of creation or of the manifestation of that wave of consciousness.  Since he symbolized the constellation of Aries and the constellation of Pisces, fulfilling the entire 360 degrees of the elliptical, the circle of stars. 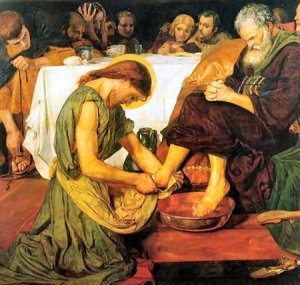 The Christic mission was to bring nurturing for the souls of humanity. Many times in the Biblical texts, the Christ mentions that he is the Bread of Life, and he even proves it by performing the miracle of the bread and fish for the multitude waiting for his teachings. The bread itself could be understood as the essence of his ethical instructions. This concept is played out again during the last ceremonial ritual of purification and preparation that he partakes with his disciple before his crucifixion.

In this ceremonial event, Christ washes the feet of his disciples, not only as a gesture of goodwill but also as a ritualistic purification, preparing his  “priests” for the next phase of their mission. It is not surprising that the feet are one of the Piscean symbols.

The Workers in the Vineyard

I will sing for the one I love,
a song about his vineyard:
My loved one had a vineyard,
on a fertile hillside.
~ Isaiah 5

The Vineyard and the wine are constant and powerful symbols that are present in both scriptures of the Old and the New Testament. The “workers in the vineyard” are a recurrent theme first mentioned in Isaiah, then in Matthew 21:33-46 and again in many of the works of the Apostle Paul, especially in: 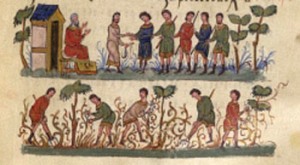 As the vineyard functions as a metaphor for the entire Creation, the wine represents the energy of Christ-consciousness and its power to transform and alter realities. Symbolically, it is the energetic Blood that feeds, nurtures and incites creatures to evolve and expand the plans of creation.

As a matter of record, the ministry of the Christ during Mater Jesus incarnation started with an act of thaumaturgy, or miracle, of transforming the water into wine, recounted in the episode of the Wedding Feast of Cana. Ironically, the Master also closes the period of his ministry during the Last Supper through another thaumaturgical process: the Transubstantiation: transforming wine into his “spiritual” blood.

The wine is also a symbol that represents the Sacred Blood, and it was and is still used in many rituals and celebrations to this day. The Sacrificial Blood is not real blood that we refer to, not in nature or content; but as the sanctified energy that permeates all living things and levels of consciousness.