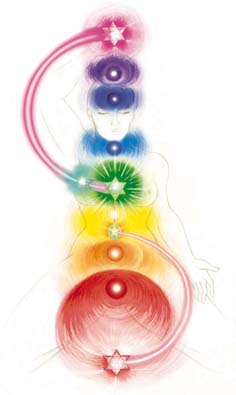 The Earth Star-Understanding the Sub-personal Chakras:

As we all know, the movement from the chakras is rhythmic, constant and harmonious.  They circulate the energy through the four bodies to promote the perfect integration between our physical body and our Higher Self. When imagining the rotation of the chakras, imagine them rotating in the clockwise movement.  Emphasis should be placed on the proper direction because there is that some literature affirms the opposite. When the chakras are perfectly aligned, cleared and strong; one can observe an interesting phenomenon: the root chakra and the crown chakra will undergo a polar inversion, which gives the origin to an opening or a Light gateway to new dimensions of consciousness.

The chakras should be experienced as live consciousnesses. They are not three-dimensional in nature, but they can be perceived tri-dimensionally, as some people have the ability to visualize them with the gift of sight. Normally the chakras are divided into two groups and differ in nature according to their location, and they function.  They are either “physical,” or personal, chakras, which include the seven most often discussed, or they are transpersonal, or spiritual, chakras which reach the areas beyond the realms of Self.

Among the transpersonal chakras, which are the ones of a more refined spiritual characteristic, we find the ones that are located “below” the self: the sub-personal chakras.

The Earth Star Chakra is the first sub-personal chakra.  It is a chakra, believed by some members of New Age and Neo-Pagan, to exist in line with one’s spine, six inches below the feet. Other traditions place the Earth Star chakra as being "two arms lengths" below the feet.  Either way, it is located in a fixed position about the physical body and not necessarily specifically located beneath the ground.

It is believed that one of the primary functions of the Earth Star is to coordinate the "grounding cord" for one's Lightbody that leads to the center of the earth; and when functioning properly in coordination with the first, or root, chakra (the Muladhara Chakra) allows one to be grounded and centered in daily living.

What we call Lightbody is the fusion of the four bodies that compound the human body: the etheric, emotional, mental and spiritual bodies. Once this fusion is achieved, health, balance, harmony and stability of perfect physical, emotional and mental are finally established. 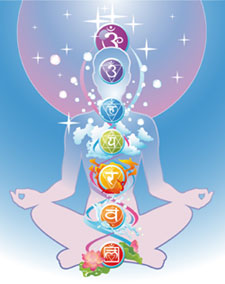 This same merge represents the unification of the objectives of the Soul and personality, the final identification between the Karma and Dharma when all becomes One. By the ancient system from Assyria, one would need to activate a fully integrated Lightbody to make the final journey through the enlightened path of the stars. One activated, the Lightbody would enable a soul to be free from all the mutational aspects of duality, igniting what we called the personal Merkabah.

One of the delicate steps of this process is the effective connection with the Lightbody of the planet, through the connection with its heart and the Christic Grid. The prospect to make this connection is only possible to the clearing, activation and integration of one’s energy system with the Earth Star Chakra.

The Chakras and the Nadis System