Thales of Miletus: Nine Answers of a Wiseman

Thales of Miletus (1) was born in Thebes in the year 625 BC and died in Athens, 547 BC, at age 78. He was a Greek philosopher, founder of the Ionian school and he was considered to be one of the Seven Sages of Greece. Mathematician, astronomer, and great thinker, Thales toured Egypt, where he conducted studies and was directly exposed to the mysteries of Egyptian spirituality/religion.

It is attributed to him the prediction of the solar eclipse in the year 585 BC, which was held an incredible feat. His mathematical talent was so unusual; it was able to establish accurately the height of the pyramids through the measuring of the shadow. Moreover, according to Herodotus, Thales of Miletus was the first mathematician to give a logical explanation for the occurrence of eclipses. Thales was the first to verify that the moon as in fact “illuminated” by the Sun, being the first one to count how many days a year was comprised of. According to Aristotle, this discovery was a landmark for the history of philosophy. Later, because of his brilliant demonstrations of the geometric theorems, he was also regarded as the father of Geometry. 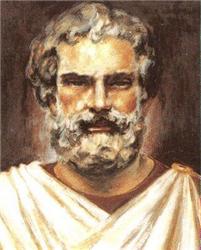 Once a sophist (2) approached Thales of Miletus, and sought to confuse him with difficult rhetoric questions. However, the sage Thales of Miletus was keen to the test because all the questions were answered without the slightest hesitation and with even greater accuracy:

1 - What is the oldest thing? - GOD, because it has always existed.

2 - What would it be the most beautiful thing? - THE UNIVERSE, because it is God's work

3 - What is the greatest of all things? - SPACE, because it contains the entire Creation

4 - What is the most constant thing? - HOPE, because it remains in man after he has lost everything else.

5 - What is the best of all things? - VIRTUE, because without it there is nothing good.

6 - What is the fastest of all things? - THINKING, because in less than a minute can fly away and reach the end of the Universe.

7 - What would be the strongest of all things? - NEED, because it makes the man face all the dangers of life.

8 - What is the easiest of all things? - The act of giving advice

But when it came to answering the ninth question, the Greek Wiseman whispered a paradox. He gave an answer that was probably never understood by the mundane interlocutor.

9 - What is the hardest of all things?

And the Thales of Miletus said: - To know thyself.

(1)He was a pre-Socratic Greek philosopher from Miletus in Asia Minor, and one of the Seven Sages of Greece. Many, most notably Aristotle, regard him as the first philosopher in the Greek tradition

(2)Sophists were philosopher-teachers who traveled around Greek cities claiming to teach their students everything that was necessary to be successful in life including rhetoric and public speaking. Sophists taught their beliefs for a considerable price. Overall, Sophists identified as either agnostic or atheistic.