The Pineal gland is a little organ situated between the right and left hemispheres of the brain, in the exact center of the brain, and has long been thought to have been a vestigial remnant of a once larger section of the brain. 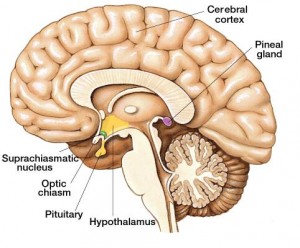 The common perception is that the Pineal gland is an evolutionary leftover just like the appendix, but contrary to Western science and medicine, the Pineal Gland is the Master gland. The Pineal Gland is your 3rd eye or Seat of Clairvoyance (the power to see objects or events that cannot be perceived by the senses). It is also known as the Eye of Ra or Heru (God). It allows you to commune with the Creator and with positive force spirits in other dimensions. 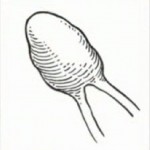 The Pineal gland plays an important role in the regulation of our sleeping patterns and consequently our Dreamtime incursions. This gland is responsible for producing two hormones:  Melatonin and DMT; the Pineal Gland produces the mystical anti-aging secretions that preserve life. Melatonin is essential for our sleep-wake cycle and peaks in the middle of the night when we are in our deepest stages of REM sleep. DMT is structurally similar to melatonin. The biochemical precursor to both molecules is serotonin, a key neurotransmitter whose conduits are involved in mood and targeted in the treatment of psychiatric disorders. DMT (N-dimethyltryptamine) also structurally resembles other psychedelic drugs, such as LSD and psilocybin, and is the active agent in the ayahuasca brews the Amazon shamans use to provoke out-of-body experiences.

It is an interesting coincidence that the Biblical Jacob saw God face to face on the island of Pe-ni-el, and his life was preserved.

"So Jacob called the place Peniel, saying, "It is because I saw God face to face, and yet my life was spared."
~Genesis 32:30

The Pineal Gland has for long been associated with esoteric knowledge surrounding the spiritual, metaphysical aspects of consciousness and the Self. Metaphysicians throughout the ages have called the Pineal gland the third eye and the Seat of the Soul.  It is said that all the vital psychic energies are channeled from the other chakras and up to the Pineal gland. This gland is also called the third eye because its structure resembles a lot the physiological constitution of our regular eyes: it has a membrane that functions as a retina, it has its fluids and also retains rods and cellular elements just as regular eyes.

The philosopher René Descartes, who dedicated much time to the study of the Pineal gland, called it the "Seat of the Soul." He believed that it was the point of connection between the intellect and the body. It acts as a receiving mechanism capable of monitoring electromagnetic fields and helping align bodies in space. With its central hormone, Melatonin, the Pineal not only regulates sleep/ wake cycles and the aging process but also appears to act as the Mistress Gland orchestrating the body's entire endocrine system and as a result, energetically speaking, the chakra system. It is also responsible for shamanic states, visions, kundalini awakening and prophetic dreams.

The Healing of a Blind Man at Bethsaida

They came to Bethsaida, and some people brought a blind man and begged Jesus to touch him. He took the blind man by the hand and led him outside the village. When he had spit on the man's eyes and put his hands on him, Jesus asked, "Do you see anything?"  He looked up and said, "I see people; they look like trees walking around."  Once more Jesus put his hands on the man's eyes. Then his eyes were opened, his sight was restored, and he saw everything clearly."
~ Mark 8:22-25

What happened the first time Master Jesus touched the man?  What went wrong that prompted the Master to do it again?  Could have it been that Jesus awoke not the single vision that pertains to the physical, but instead awoke the spiritual sight? 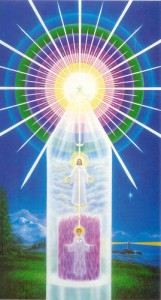 If you are familiar with the pictures of the "Divine Presence I AM" you maybe see what that man did: he saw the real structure of the subtle bodies, vision can be defined as beyond the perception of the real physical five senses. We cannot help but wonder if, when Master Jesus touched the man, that he awoke the Pineal gland a little too much, and so he touched the "blind man" again, correcting his vision to mere 3D physical reality. A Pineal gland fully activated allows you to have access to Mystic visions, the Spiritual world, the World Tree, and the Akashic Records, where all the knowledge of the ages is stored.

It is a fact that our modern lifestyle is not something that helps in our abilities to develop or even use the Pineal Gland to its full potential. All of us may naturally experience the hardening of this gland as we age. The Pineal gland begins to harden with calcified tissue starting at adolescence. These strange calcified deposits between 3-5 mm are called "brain sand."  The Pineal gland is the seat of spirituality. When the Pineal gland is calcified, one's spiritual advancement is hindered.

Humanity Healing is offering a series of eBooks, videos, and mp3s to enable the activation of the Pineal Gland and the strengthening of the connection through it.  The eBooks contain background information, Ageless Wisdom teachings, spiritual exercises, dietary suggestions, meditation aids and recommendations to reverse calcification of the Pineal Gland.

For more information, please visit Pineal Gland Activation in the Services section of the pull-down menu.