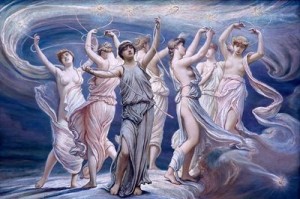 The Pleiades (M45) is an open star cluster of seven stars located northeast of the Orion's Constellation; which is visible to the naked eye in the neck of constellation Taurus. Taurus constellation is the prime location where we can find the biggest emblematic star symbols: The Hyades and the Pleiades.

The Pleiades have been referred to by many names, such as the Seven Sisters, Krittika, Kimah, Flock of Doves, Hens, Virgins of Spring, Sailor's Stars and the seven Atlantic Sisters. 'The Pleiades were known as Seven Sisters by indigenous people in North America, Siberia, and Australia and this joint heritage mean they were described more than 40,000 years ago. 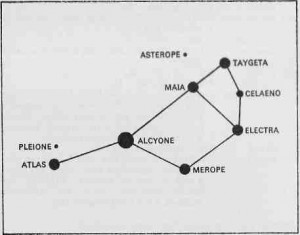 The cluster consists of 7 small stars: Electra, Celaeno, Taygeta, Maia, Merope, Asterope, and Alcyone; with Alcyone being the central star and known as the Star of the Weeping Sisters.

The Pleiades were companions of Artemis, and they were the seven daughters of the titan Atlas and the sea-nymph Pleione born on Mount Cyllene. They are the sisters of Calypso, Hyas, the Hyades, and the Hesperides. The Pleiades were nymphs in the train of Artemis and, together with the seven Hyades, were called the Atlantides, Dodonides, or Nysiades; and were the nursemaids and teachers to the infant Bacchus.

One of the most enduring myths involving the Pleiades is the story of how these sisters became stars, their catasterism. According to some versions of the tale, all seven sisters committed suicide because they were so saddened by either the fate of their father, Atlas or the loss of their siblings, the Hyades. In turn, Zeus, the ruler of the Greek gods, immortalized the sisters by placing them in the sky.

Temples in Greece and Ancient Egypt were oriented to these stars. The Great Pyramid of Giza had been built in alignment with the Pleiades. Temples, stone circles and other rock formations in Polynesia and many other places on the planet show Pleiadian alignments. Every 52 years in the Mayan civilization the Pleiades would pass directly overhead of major ceremonial centers, such as Tikal and Palenque. 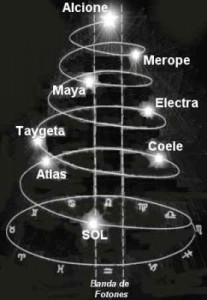 The Pleiades have been a source of wonder for thousands of years and are connected to the agricultural seasons. They have inspired poets and guided sailors, and many ancient buildings were aligned to collect light from the star cluster including the Parthenon and Mayan temples. More recently they have inspired students of conscious ascension who view the Pleiadean system as a Stargate of multi-dimensional information.

For more detailed information, the eBook, The Pleiades Codex: The Seven Light Sisters, is available in the Member section of the Website in the Online Resource Center, the Halls of Learning, area of the website.

FAIR USE NOTICE
This video may contain copyrighted material the use of which has not always been specifically authorized by the copyright owner. We are making such material available in our efforts to advance understanding of environmental, political, human rights, economic, democracy, scientific, and social justice issues, etc.  We believe this constitutes a 'fair use' of any such copyrighted material as provided for in section 107 of the US Copyright Law.  In accordance with Title 17 U.S.C. Section 107, the material on this site is distributed without profit to those who have expressed a prior interest in receiving the included information for research and educational purposes.