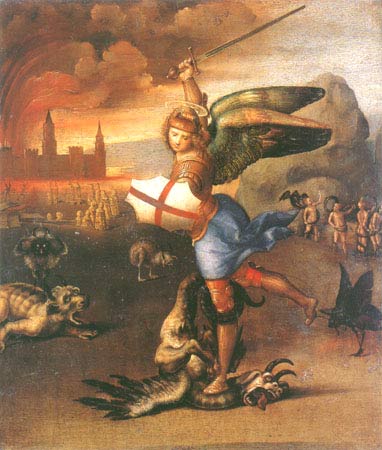 "The question of how many angels could dance on the point of a pin no longer is absurd in molecular physics, with its discovery of how broad that point actually is, and what part invisible electronic 'messengers' play in the dance of life"
~ Lewis Mumford

Angels, Messengers of the Divine, appear frequently in Scripture, but only Michael, Gabriel and Raphael are named.

Michael appears in Daniel's vision as "the great prince" who defends Israel against its enemies; in the Book of Revelation, he leads God's armies to final victory over the forces of evil. Devotion to Michael is the oldest angelic devotion, rising in the East in the fourth century. The Church in the West began to observe a feast honoring Michael and the angels in the fifth century.

Gabriel also makes an appearance in Daniel's visions, announcing Michael's role in God's plan. His best-known appearance is an encounter with a young Jewish girl named Mary, who consents to bear the Messiah.

Raphael's activity is confined to the Old Testament story of Tobit. There he appears to guide Tobit's son Tobiah through a series of fantastic adventures which lead to a threefold happy ending: Tobiah's marriage to Sarah, the healing of Tobit's blindness and the restoration of the family fortune.

The memorials of Gabriel, 24 March, and Raphael, 24 October, were added to the Roman calendar in 1921. The 1970 revision of the calendar joined their feasts to Michael's, 29 September.

Each of these archangels performs a different mission in Scripture: Michael protects; Gabriel announces; Raphael guides. Earlier belief that inexplicable events were due to the actions of spiritual beings has given way to a scientific world-view and a different sense of cause and effect. Yet believers still experience God's protection, communication and guidance in ways which defy description. We cannot dismiss angels too lightly.

For those that could not join us on 15 September for the first in a series of classes on Angels - Embodiments of the Divine, we are including the recordings below.  For those interested in attending the balance of the classes and/or obtaining a copy of The Angelus - A Compendium of Angelic Rituals and Attunements, please join us in the Online University.

The Topology of the Universe

To listen to the teleconference, click the link below: