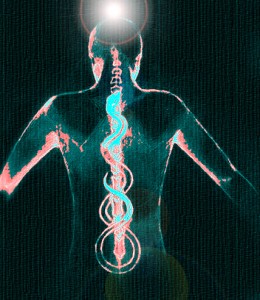 "Our challenge is to recognize and develop the biological potential within. This is the true goal of life."
~Joseph Chilton Pearce

Kundalini, from the Sanskrit kund, "to burn"; kunda, "to coil or to spiral".  A concentrated field of intelligent, cosmic, invisible energy absolutely vital to life, beginning in the base of the spine when a man or woman begins to evolve as wisdom is earned. Kundalini has been described as liquid fire and liquid light. The ultimate outcome of kundalini is the union of will (sakti kundalini), knowledge (prana kundalini) and action (para kundalini).

When the Kundalini awakens, an intense psychological and physiological process of transformation begins. This process can be quite terrifying, especially if the person has no knowledge of Kundalini and has not had any exposure to teachings of a mystical or transcendental nature. Western religion has no awareness or understanding of this phenomenon. Most people never even hear the word Kundalini unless it happens to them. As with everything, the experience is perceived within the context of the one's own personal belief system. For some, it may be a transcendental and divine experience sent directly from God, for others, it may be a strictly biological phenomena, purely physical in nature. What is needed is awareness of the process. With awareness comes understanding. With understanding, fear subsides. According to the philosophy of Tantra, the entire universe is a manifestation of pure consciousness. In manifesting the universe, this pure consciousness seems to become divided into two poles or aspects, neither of which can exist without the other. Tantra views the human being is a miniature universe.  All that is found in the cosmos can be found within each individual, and the same principles that apply to the universe apply in the case of the individual being.

One aspect, Shiva, is masculine, retains a static quality and remains identified with unmanifested consciousness. Shiva has the power to be but not the power to become or change. The other aspect, Shakti, is feminine, dynamic, energetic and creative.  Shakti is the Great Mother of the universe, for it is from her that all form is born.

Kundalini is classically described in Hindu scriptures and cultural literature as a sleeping serpent, coiled three times and resting at the base of the spine in the root chakra. This primordial energy is referred to as Shakti, the divine cosmic power which creates and maintains the universe and is considered to be a feminine energy. Once awakened, it begins an upward ascent, through the subtle body, running through the main energetic meridian next to the spine (referred to as the Sushumna Nadi) until it reaches the crown chakra at the top of head. Once this happens, the Shakti energy then merges with Shiva, the Divine Energy of creation, merging together man's lower and higher natures:  the Ego and the Divine. 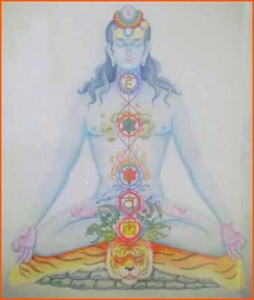 The awakened Kundalini proceeds through each chakra, from the root chakra to the crown chakra, stabilizing at each one, until the merging of Shiva and Shakti, the male and female energies, at the crown. This merging also requires a stabilization and once that is complete, the Kundalini will move back through the heart and into the solar plexus, where it will terminate. This signifies the end of the Kundalini process, its purpose is complete. The spiritual body is now fully infused into the physical body and the consciousness of the person continues to expand and evolve through this new experience.

Kundalini Shakti is a sexual energy; Kundalini Shakti is conceived as a goddess, then, when it rises to the head, it unites itself with the Supreme Being (Lord Shiva).  The aspirant becomes engrossed in deep meditation and infinite bliss. This raw energy is the secret "tool", which, when awakened, has the power to transform an individual from ordinary to exceptional.

To see a video on Tantra and Kundalini, visit:  http://humanityhealing.net/2009/02/tantra-and-kundalini

Humanity Healing is sharing a free eBook on Kundalini.  To read or download, please register and click:  Kundalini: The Serpent of Fire

Humanity Healing will be offering a Kundalini eCourse in our Online University program.  Dates to be announced.