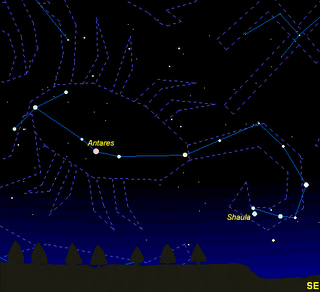 Antares, a first-magnitude red supergiant, is found in the constellation Scorpio, and is the 14th brightest star in the heavens. Antares is the Heart of the Scorpion.

In the Greek tradition, Antares means anti-Ares, who was the God of War.  This star represents the Lightwarrior who battles against senseless violence and the unjust oppressor.

In very ancient times, Scorpio spanned the two modern day constellations of Scorpio and Libra. The extended claws of the Scorpion were what Libra is now. In the western world, the name of this constellation has remained unchanged throughout all of recorded history. 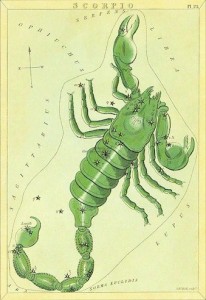 Many other cultures also saw a scorpion in the sky. The ancient Persians called it Kazhdum, meaning scorpion or scorpion-monster. The Akkadians, who inhabited Mesopotamia a couple of thousand years BCE, gave it the name Girtab, which means stinger. In Egyptian astronomy, Antares represented the goddess Selkit, the Scorpion goddess.  Pre-Columbian civilizations referred to it as Zinaan ek, the seven stars of the scorpion.

Antares is one of the four Royal Stars or Guardians of the Sky.  They were a group of stars noticed by the Persian astrologers, and mentioned by Zoraster, the founder of Zorasterism, around 3000 BCE and used as a rudimentary seasonal calendar.

The Royal Stars of Persia are so named because roughly 5,000 years ago, during the fabled pyramid age of Egypt, these luminaries held tremendous influence. Endowed with almost archangelic power, these legendary stars of antiquity are Aldebaran, Regulus, Antares and Fomalhaut, and in the epoch of 5,000 years ago they were considered to be guardians of the Four Corners of Heaven and the Watchers of the Directions, forming a heavenly cross near the ecliptic. The four "royal" stars (known as lords) were called the Watchers. Each one of these stars "ruled" over one of the four cardinal points.  Antares is the Watcher of the West.