The Holy Grail is a sacred object figuring in literature and various Christian traditions.  It is most often identified with the dish, plate, or cup used by Jesus at the Last Supper and said to possess miraculous powers. According to Gnostic traditions, this belief is intimately related to the tragedy of Golgotha[1]. The ancient registries of old traditions report that Nicodemus, along with Joseph of Arimathea, fulfilling a previous request from the Master, collected in a sacred vase the blood that poured forth from the open wound in Christ’s side caused by the Spear of Longinus[2] during the crucifixion. This turned out to be a relic secretly guarded in a hidden place. The angels who remained neutral during the rebellion of Lucifer were its first guardians.  It was then brought to earth and entrusted to Titurel, the first Grail King.

The phenomenon of blood and water which poured from Christ’s side was considered a miracle by Origen. Catholics choose to employ a more allegorical interpretation: it represents one of the main key teachings, or mysteries, of the Church and one of the main themes of the Gospel of Matthew. 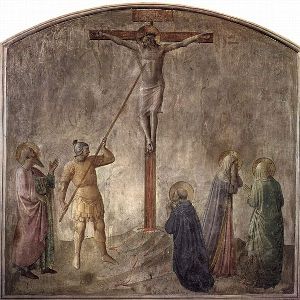 The Gospel states that the Romans planned to break Jesus' legs, a practice known as crurifragium, which was a method of hastening death during a crucifixion. Just before they did so, they realized that Jesus was already dead and that there was no reason to break his legs. To make sure, a Roman soldier, named Longinus in Biblical Apocrypha, stabbed him in the side with his spear.

“… But one of the soldiers pierced his side with a lance, and immediately there came out blood and water.”
~John 19:34

What is mentioned in the apocryphal reports, but left out of this inexplicable passage of the New Testament, is the “instant illumination” experienced by Longinus while using the spear. He did not acquire a renewed physical vision, as some extra-biblical sources state: his blindness was one of spiritual nature. It is said that the Light that emanated from the open wound struck the centurion, transmuted his entire being into an enlighten individual. His sincere regret on contemplating the result of his actions caused him to weep. 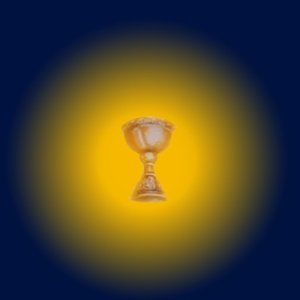 A similar occurrence is again observed in the proverbial “lightning strike” with the Apostle Paul on the road to Damascus. Tradition states that Paul acquired the spiritual vision and experienced a person transformation that would later lead him to be one of the main disciples and evangelists of the newly Christian faith.

The physical recipient, or chalice, used by the two disciples to collect Christ’s blood was supposedly carried to a sanctum sanctorum, an inner chamber of sorts inside Earth, corresponding to the Holy of Holies, a secret place where tradition says is inhabited by Gods.

In the year 900, it is said that the Holy Grail manifested itself, although still not accessible to regular human eyes, inside of a Tibetan temple bordering Western Tibet. In this place, 85 years later, another “dramatic” incident came to pass which affected not only the referenced monastery but other seven ones.

After this occurrence, the guardianship of the mysteries of the Grail endured a fundamental transformation. The Holy Grail continues to be safeguarded in the same sanctum sanctorum, which had been the custodian of the alchemic chalice. Its continuity still resembles the higher octave vibrations of Christ-consciousness.

In the Book of Revelations, we find the mystery of the seven churches guarded by seven angels. These “churches” were the temples where the candelabra of seven arms burned the Flames of Life. In other tradition, the candelabra means the enlighten circle of celestial lights.

Finally, the mysteries that surround The Holy Grail, including all the institutions and organizations that may profess are the “holders” of these energies on Earth, undercover the real initiate significance of the Holy Chalice, because it is still the anchoring point of the Christic Flame and the basal point that stands forth as a “lighthouse” guiding the “travelers” home.

[1] Golgotha or Calvary was the site, outside of ancient Jerusalem’s early first century walls, at which the crucifixion of Jesus is said to have occurred. Calvary and Golgotha are the English names for the site used in Western Christianity. Golgotha is the Greek transcription given by the New Testament, of an Aramaic title, which has traditionally been presumed to be Gûlgaltâ. In some Christian and Jewish traditions, the name Golgotha refers to the location of the skull of Adam. A common version states that Shem and Melchizedek traveled to the resting place of Noah's Ark, retrieved the body of Adam from it, and were led by Angels to Golgotha, which was described as a skull-shaped hill at the center of the Earth.  It is also where the serpent's head had been crushed following the Fall of Man.

[2] In the apocryphal Gospel of Nicodemus which was appended to late manuscripts of the 4th century called Acts of Pilate, the soldier is identified as a centurion and called Logginus or Longinus.  This makes the spear's "correct" Latin name Lancea Longini.  The spear is also known by the name The Spear of Destiny.