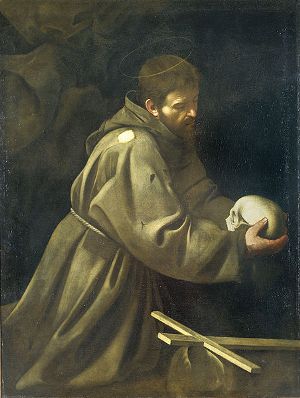 God Would Kneel Down

For once He asked me to join Him on a walk
through this world,

and we gazed into every heart on this earth,
and I noticed He lingered a bit longer
before any face that was
weeping,

and before any eyes that were
laughing.

And sometimes when we passed
a soul in worship

God too would kneel
down.

I have come to learn: God
adores His creation.

Saint Francis of Assisi, or Giovanni di Pietro di Bernardone, was born in Assisi, Italy, on 5 July 1182. The son of a wealthy merchant, he received an appropriate education geared for business.  At the age of 16 years, he participated in the fight against the feudal nobility, was imprisoned in the city of Perugia, where he stayed a year in prison.

At the age of 16 years, he participated in the fight against the feudal nobility,  and he was imprisoned in the city of Perugia, where he stayed a year in prison.
In 1203, back to his hometown, Francis lived his life of parties, festivities, and pleasure. In 1206, praying in the chapel of San Damiano, he heard a call of Christ who said to him:

"Go, Francis, and restore my house." Since then he surrendered to the service of God and the poor. In 1208  he made vows of poverty and began to preach his doctrine.

In 1208  he made vows of poverty and began to preach his doctrine.
In 1204  Saint Francis founded the "Order of Beggars Brothers of Assisi" and settles in huts in the mountains, He was decided to fulfill the sacred spiritual mission faithfully, renouncing any form of property, refusing to have a church, living off meager donations they received.

Saint Francis attitude was original. He spoke about the goodness and wonder of creation at a time when the world was seen as essentially evil. Saint Francis  loved all creatures calling them brothers and sisters. Some scholars claim that his positive view of nature and man,  pervaded the imagination of the whole society of his time; he was recognized as one of the first forces that led to the formation of the philosophy of the Renaissance .

Mystical Poetry of Theresa of Avila