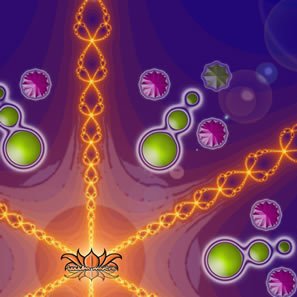 Yoga mantra is the practice of mantras as a spiritual training.  Yoga is a physical, mental, and spiritual discipline, originating in ancient India. The goal of yoga, or of the person practicing yoga, is the attainment of a state of perfect spiritual insight and tranquility while meditating on Supersoul.

The Tibetan mantras are intoned and performed as repetitive prayers, such as the prayers of Mystical Christianity, which are still exercised by Catholics, although not Protestants. In Tibetan Mahayana Buddhism, all the mantras are in Tibetan, as the Japanese Zen Buddhism expresses their mantra practice in Japanese.

For some schools of thought, the mantra can be any sound, word, phrase or text that retains a specific power. For these schools, it is fundamental that the mantras belong to the original language so that the meaning and pronunciation will not suffer from the erosion of regionalism and evolution of the language because this would affect the significance of the seed word.  This means the language is often archaic or a “dead” language.

Mantras exist to facilitate the skill of concentration; when used along with meditation, it can either energize, or relax, or even facilitate the awakening of dormant capabilities. Through the awakening of the energetic channels, one is able to cleanse the chakras, developing and building new vibrational patterns into their power system. The mantras can jump start the initiation in powerful vibrations that can be represented both by a specific spiritual frequency or a state of consciousness. For instance, the word Shanti means Peace, but the repetition not only brings the frequency of peace, but it simultaneously creates the state of Peace inside of the chanter.

With the proper use through time and practice, a mantra can overcome all the dissonances and non-harmonic vibrations that are lingering in one’s energetic body system. As multidimensional beings, we tend to gather a diversity of different frequencies, even though the absorption of vibrations from others nearby. In other words, a repetition mantra can and will harmonize your general frequency, modeling your pulsating rate, eliminating and muting other vibrations. This is one of the achievements of this practice: concentration and centering.

There will inevitably be many changes that one can experiment in time through this practice, a priori they are felt at the subtle levels, but progressively their effects can be observed in various levels of one’s life.

The expansion of your ability to think clearly, the cleansing of your sub-conscious mind through the elimination of secondary acquired vibrations, and a more calming effect in our relationships are just a few of these side effects.

At a profound level, we can say that our subconscious mind is a communal consciousness of all the forms of primeval consciousness which exist throughout the physical and subtle bodies. The dedicated use of mantra can open a space or gateways into subconscious crystallized thoughts, stored in the organs and glands, and transform these bodily parts into repositories of peace.  The mantra can be defined as the entry way for the release of many crystallized samskara.