The Timeless Origins of the Tarot Cards

Tarot as a word does not have a specific translation, as it is derived from an uncertain etymology.  We can find variations that go from tarock, tarok, tarocco, tarocchi. It is believed that the word stemmed from the Arab turuq, which means the “Four Pathways.”

A lot has been said about the origins of the Tarot, aside from the history told about their “re-appearance” in Europe in the mid-15th century,  It seems, in fact, that the tarot has its beginnings in old temples of initiation of ancient times. 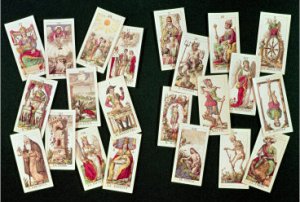 One of the many legends surrounding the Cards or Tablets comes from the period that preceded the decline of the Ancient Egypt culture and spiritual system. It is said that the High Priests, foreseeing the decadence of Humankind and the beginning of an Era of Darkness, held a council to decide on how to preserve the ancient knowledge and Ageless Wisdom for the future generations. Many indicated that the best way to keep the sacred secrets guarded was through the hands of those that were virtuous and honorable individuals. But others argued that in truth during the dark ages, many would fall into the traps of self and would not be able to pass through the generations the archetypical knowledge of the Tablets. After much debate, they decided that the only reliable way to immortalize these Tablets of Knowledge was in trusting in the power of vices instead of the virtues. In doing this, they trusted that the Wisdom of the Ages would manifest by the actions and influence of the Higher Self of the person that received the archetypical templates. To continue the preservation of the ancient wisdom, the Priests developed the tablets with the pictorial representation of the archetypes and invented different types of games to be taught to the common people so they would be able to spread the influence of these powerful energies around, hoping they will reach the right hands.

As Egypt was the main strategic point of the ancient world where all the commerce, culture, knowledge and political control abounded and was disseminated to the neighboring regions.  It was not a difficult task to spread the card games to sailors and merchants who gladly spread them to the diverse regions of the ancient world.

Traditionally, the common card readings are associated with the prototype of the Gypsies, generally nomadic tribes that traveled the world selling goods and doing readings to those interested in knowing their future. Perhaps the name “Gypsies” came originally from the word “Egypt”, and the gypsies were the ones that inherited the Tarot Cards and knowledge from the original Egyptians.