The Double Sighting: Crisis and Lessons of the Master of Time 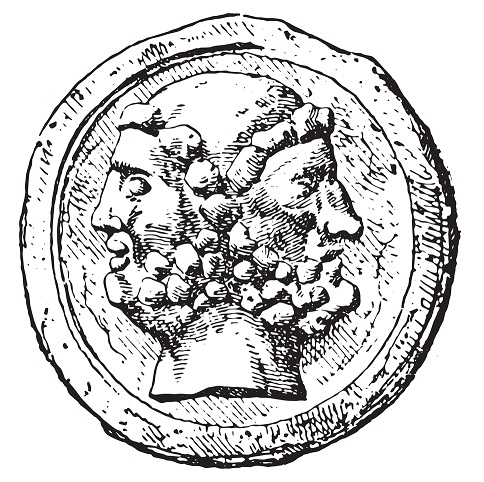 The symbolism of Janus relates to two dimensions of time; between the past (which is no longer- and we can name “the before”) and the future (which is not yet- or “what is to be”), the true face of Janus, that which looks at the present and is supposed to meet us, is not shown. It is neither one nor the other of the two faces we can see. This third face is, in fact, invisible because the present, in its temporal manifestation, is but an intangible and imperceptible instant. This is also why certain languages, such as Hebrew and Arabic, do not have present tense verbs.

The reasoning behind that is that in Ageless Traditions, God could not create and be the creation at the same time, because in the worlds of duality, the frame is too restrictive to contain all the splendor and might of the Almighty. For this reason, we say that God cannot be restricted by the one dimension of time.  In our plane of existence, our three-dimensional reality is composed of three dimensions of space and a fourth that superimposes itself, the ONE dimension of time.  God is timeless; his dimension is not even understandable through the realms of eternal, but only through the dominions of the Everlasting.

In many of the Roman forums, temples were built to Janus, which had four portals called Janus (Yanus) Quadrifons and most gates of Roman cities had a representation of the faces of Janus.

In mythology, one of the faces of Janus spoke the truth while the other lied, thus confusing the person's time to make an important choice that could bring significant consequences.  This shows the duality of Janus and his role as God of manifested beginnings. Some traditions believe that Janus also embodied the chaos, both exterior and interior.

The Reality of Timelines

Timelines are often used in an educational environment to help students and researchers with the understanding of events and trends for a particular subject. They are mostly used to show periods of time between two events.

Timelines can make use any time scale, depending on the subject and data. Most earthly timelines use a linear scale, where a unit of distance is equal to a set amount of time. This time, a scale is dependent on the events in the timeline. A timeline of evolution can be over million of years, whereas a timeline about September 11, 2001, can take place over minutes. While most timelines use a linear timescale, for very large or small timespans, logarithmic timelines use a logarithmic scale to depict time.

Nowadays, we can easily say that there is much confusion about the real concept of timelines and their time span.  They are like most of the mental constructs used to organize our positioning about an episode, being that a physical, emotional, or spiritual event.

When the new age movement speaks about the collapsing of the timelines, they are speaking virtually about the reunification of different internal realities perceived through the “eyes” or concepts of the Kairos’ time, or internal time. It is also inferred in the same broad concept of timelines the idea of a spiraling of the quantum energies of the planet creating an inverse vortex point that would effectively change the paradigm of the three dimensions of space and one of time to one of three dimensions of time and only one of space. This is the blast of the linear time for a more integrated multidimensional concept of time, able to apprehend the level of expansion of the new human consciousness.