"Then I looked, and behold, on Mount Zion stood the Lamb,
and with him 144,000 who had his name and his Father's name
written on their foreheads."
~Revelations 14:1

An Explanation of the Esoteric Meaning of the term Monad

The Human Being holds a diverse nucleus of consciousness and their focal points of expression are the different levels of the Universe.  The Monad is for humans the fundamental nucleus of our actual phase of Evolution.  The Monad is originated from an even more profound nucleus: the cosmic spark of the Creator. Your Monad is your projection inside of the physical cosmic Universe.  Your soul is the projection of your Monad in the abstract levels of the human egoic expression, generating you as the projection of the Soul in the concrete world.

In our life here on Earth, we are directly conditioned to the experience of the Self.  It is a necessary condition to evolution and expansion of All That Is. This conditioning allows us to experience Earth as individual beings.  As a result, we tend to forget our primary nature and existence, and the underlined connection with all.

The word Monad comes from the Greek word "Monas" which means ultimately, UNITY. This word was first used by Pythagoras and later by the philosopher Gottfried Leibnitz. In Ageless Wisdom, Monad is used to exemplify the central consciousness, the Divine immortal part of our spiritual spark. From this fact is derived the concept of our inherited Divinity and that our path of self-realization and self-awareness through awakening.  It gives us the possibility to experience our Divine capabilities in the course of our experiences with the Universe, the kingdom of Nature, meditation and through human interactions. 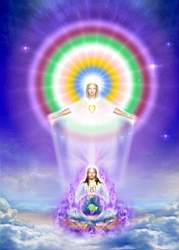 The Monad is composed of a simple substance:  pure radiant light.  It is whole unto itself and cannot be divided into different beings with different natures except its original Divine Light. The Monad is eternal and it holds an immense series of manifestations.  Every living being from the diverse levels of consciousness has a Monad from the smallest to All That Is.

Our Monads are the cells in the body of God.

Our Monad acts as a transformational station of the energy that emanates from the Cosmic Spark of the Creator, or All That Is, Mother/Father God, however you chose to name the ultimate Being.  Through the Monadic influence, the individual consciousness learn the laws of the different realms of density as it continues its journey of understanding and awareness though its personal synthesis,  leading it inevitably to its self-realization as an avatar. In this level of consciousness, the Monadic Consciousness, there is no division or differentiation and everything is composed of the same Divine Essence.

One interesting theory comes from the teachings of the Tibetan Master Djwhal Khul through the writings of Alice Bailey. In these teachings, it is explained that the primeval energy called Monad, divides itself in twelve extensions of Souls. Each of these twelve "Souls", willing to experience the density and learn the lessons of duality either here on Earth or in any other plane of duality, divides itself again:  each into twelve Soul extensions.  In this way, each one of us can be understood as being an extension of this superior energy that we call "our Soul". 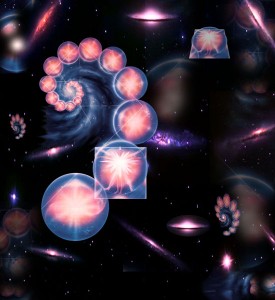 The Soul and the Personality

The Monad, or the individualized Spark of God, decides through its free will to experience life inside of the materially manifested Universe. Through its original mental power of manifestation, it creates the twelve Souls. Each Soul is a small projection of its creator or, in this case, the original Monad. The Soul is known as your Higher Self.  The Lower Self is known as your personality or Ego.

In its turn, eager to experience duality and the dense incarnations inside of the material universe, the Soul self creates its own twelve soul extensions.

This division results in a multiplication of experiences through the diversity of different manifestations, allowing the Soul to expand into different levels of consciousness and to amass a large number of learning experiences.

We are the projection of our Soul's extension and they are the extension of the original Monad.

The Monad is a thread in the tapestry that composes the Consciousness of Creation: Mother/Father God, or All That Is.

Each of us has a Spiritual family comprised by the other eleven soul extensions of your original Soul. Not all are necessarily incarnated on Earth at this time.  They can be anywhere in this Universe as a result of our multidimensional nature. It is also plausible that not all the extensions of our direct Soul are currently incarnated in the physical plane; they may be having just a spiritual existence at this moment. Independently of that, the connection and exchange among all the parts are real experiences.

We can say then that the Monad is comprised of 144 soul extensions that constantly share knowledge among themselves.  This is your Oversoul, or Family of Light. The shared experiences contribute to the expansion of the field of experience and consciousness of every Monad.  In turn, it is through each Monad that God experiences its Creation:  each Monad created by the Divine Mind are like cells that constitute the body of the original Source, known by many cultures as God, or All That Is.

Members of the University can watch the video, The Monad, in the Video Section of the Online Resource Center.