Esoteric Astrology and the Use of Herbs

"The Muladhara chakra is the Sanskrit name of the root chakra: Mula means root and Dhara support, security, media. So, it is literally translated to mean the body's root support. It is located at the base of the spine or the coccyx (perineum point between the anus and the sexual organs). Other traditions and ancient texts have referred to the root chakra as the Kundalini resting place.

It is the tribal energy of "all is one", describing the identity of the group or the group of strength, willpower, and grounding belief pattern and connecting the individual with the tribal group.

The Muladhara is most active during the sunrise (dawn) and the Sunset part of the day, as it is also regulated by the energy of the Sun. The Root Chakra is activated naturally in childhood between the ages of one to seven years old. This is the time when a being is to learn to say yes to life and discover life choices and Movements. 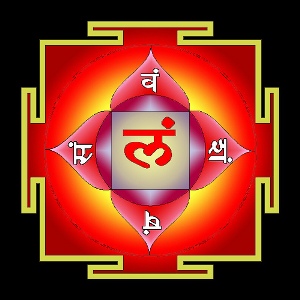 The base chakra is located at the base of the spine and has four small vortexes red. This chakra is the first physical connection between human beings and the planet Earth, not at the holographic level as with the Earthstar Chakra. The more open and vitalized the base chakra, the higher our provision of physical energy. It is theorized that the root chakra contains the main eight cells that hold knowledge creation within them. It is also the theory that these eight cells are the only cells in your entire body that never suffer any type of change during physical life and continue with your soul / spirit for all time, in all lives yet to come.

This chakra is associated with economic resources, survival, the basic needs of our existence; the ability to handle money, our independence from others, sense of direction and guidance in life; among other factors. It also regulates our ability to fight for the realization of our ideals.

Factors Regulated by the Root Chakra:

The Muladhara chakra is also called the fundamental chakra, root, or basal kundalini chakra, because it is located at the base of the spine or backbone, near the sacrum-plexus.

During its spiraling movement, it presents itself through astral vision as only four lines, forming a suggestive picture of a cross an ethereal orange, red color with red flares in its center.

It is the most primitive and simple of all chakras and in its "physical" manifestation, is one of the major outlines of shapes and stimuli of our organic life. It is the driver of the famous "Serpentine Fire," an etheric center responsible for the flow of powerful energies emanating from the Sun and Earth intimacy: energy "mother of the world" because it is the main foundation of life in matter.

Muladhara chakra is also related to the first layer of our Auric field, our intermediate state of matter between the world and our perception as a personality-soul.

When this center is out of balance, we tend to fear more intangible things. Some of these dysfunctions can create a lack of emotional control, causing decontrol of sexual energies, and creating dis-eases in organs related to this center. It can also present an agitated behavior and feel of general discomfort in being with our physical body.

When there are physical pathologies related to this unbalance, they are all feared based: either of rejection, failing, to face the unknown, to assume a posture sexual guilt, and fears that were rooted in the personality-soul during traumas in past lives. Many of these problems can manifest as disturbances at the kidneys and adrenal levels.