The Zodiacal Hierarchy of Aquarius 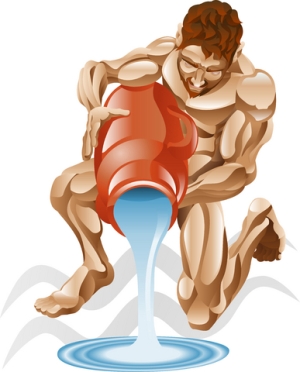 Dedication on January 5th and throughout the solar month of February, January 20th-February 19th, is to the Hierarchy of Aquarius. During these two periods, this Hierarchy holds above the earth a cosmic pattern embodying the ideals of the Fatherhood of God and the brotherhood of man, the foundation for a type of friendship that is destined to expand until it becomes all inclusive and world embracing. This ideal should be held in the soul's Holy of Holies and never marred or desecrated by an unworthy thought, word or deed. Working to bring it into manifestation is the mission of Aquarius, the Divine water-bearer of the skies.

Through the benign influence of the Aquarian Hierarchy Love will become the motivating force in all that lives. On that day when emancipated humanity will show forth love as the fulfilling of the law, as Saint Paul prophesied.  To put it in other words, every law will be founded upon Love and Love, in turn, will bring the fulfillment of every law.

Aquarius is the home of Angels, and Love aptly describes the joyous life of these celestial Beings.

The Disciple correlating with Aquarius is Matthew, the rich publican and sinner who, when he heard the voice of the Lord, left all and followed Him gladly. He renounced all worldly possessions for which he later received rare compensation in the form of a spiritual realization which found expression in the immortal Gospel bearing his name:  a priceless heritage to all mankind.

The two lower limbs form the dual body organs correlating with Aquarius. They are the two columns of man's body temple and should be visualized as coordinated in motion and symmetrical in form.

The biblical seed thought for meditation on January 5th and during the solar month of February is:

If an aspirant will concentrate upon the subtle meanings hidden in these four short words, and keep them alive in consciousness while the Aquarian rhythms vibrate above and through earth, great will be their illumination.

To participate with the Self-Intunement, visit: Affirmations of the Signs – Aquarius in the Humanity Healing Community.