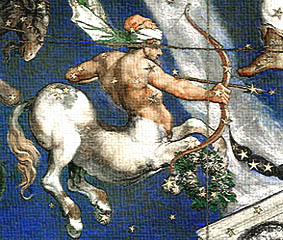 Sagittarius is a large constellation best viewed in early summer. The constellation as a whole is distinctive for looking like a teapot, complete with spout and handle. The most easily identifiable part of it is the group of stars around the bow and central figure that form a trapezoid shape. Sagittarius is the happy hunting ground of the summer observer. Within it lays the very heart of the Milky Way itself, providing vistas which are unparalleled in grandeur and diversity.   Southern Hemisphere observers have the best view, since Sagittarius flies straight overhead when viewed from Australia, South America, and southern Africa.

Sagittarius contains a rich part of the Milky Way, lying towards the center of our Galaxy. The exact center of the Galaxy is believed to be marked by a radio-emitting source that astronomers call Sagittarius A. Scientists speculate the existence of a huge Black hole in the center of our Galaxy: an enormous celestial body, disproportionally dense and much heavier than our own sun. The "heart center" of the Galaxy expresses a tremendous amount of gravitational force. In addition, there are many other notable celestial objects in Sagittarius, including the Lagoon Nebula and the Trifid Nebula, two massive clouds of gas lit up by the stars inside of them. We can infer that in this section of the universe, extraordinary events take place and amazing exchanges of light energies of various degrees through the vastest of consciousness manifestations. 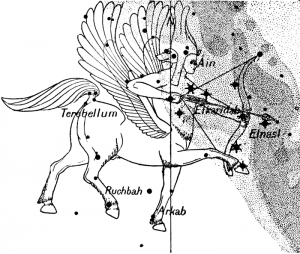 Sagittarius is a constellation of Sumerian origin, subsequently adopted by the Greeks, and this helps explain the confusion over its identity and nature.  Ancient Babylonians referred to Sagittarius as Pabilsag or Nergal, a god with wings and the head of a lion.  The Greeks pictured Sagittarius as a centaur, a creature that was half horse, half human.  Adding to this is the fact that there is a second Centaur constellation:  Centaurs.  The problem of having two centaurs in the sky has meant that their myths have frequently overlapped, although their ascribed natures and origins are very different - Chiron being gentle, wise and peace-loving, at the same time as Sagittarius, known to originate from Mesopotamia, is war-like and fierce.