"And as Jesus passed by, He saw a man which was blind from birth. And His disciples asked him, saying, Master, who did sin, this man or his parents, that he was born blind?"

"Jesus answered, neither hath this man sinned, nor his parents; but that the works of God should be made manifest in him."

This specific passage of the new Testament clears the misunderstanding of the law that says that physical disabilities are due to the sins of the ancestors, therefore not necessarily consisting in pure punishment, but a manifested way to deliver a set of teachings for the soul that incarnated in the pursue of enlightenment. The sufferings and pains that would accompany the limitations of the physical conditions will cease to exist once the lesson is learned.

Reincarnation in the Kabbalah: the Earthly Human Souls 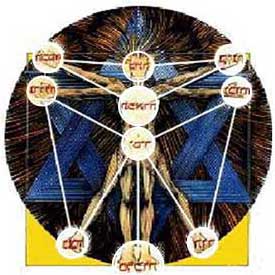 According to the Zohar (III, 219b), when a human being is about to take upon a physical body through the process of incarnation, the Mind of God unites itself with the energy of Shekinah to provide to this being a soul vehicle, which is the physical body and its earthly progenitors.  This is also the basic process of conception and creation of the Celestial bodies, the beings of heaven and earth, angelic and beings from the light and those not quite from the light, which are necessary , in order to keep the balance of duality.  It is necessary the union and requires the participation of the two to create and manifest creation (Zohar III, page 81).