Archetypes and Timelines I - Page 2 of 3 - Humanity Healing Network 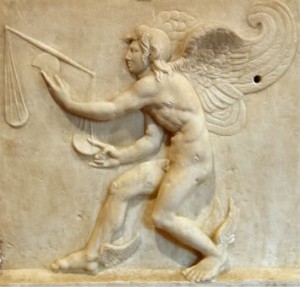 In Greek mythology, Kairos (“the right time" or "appropriate" time) is the son of Chronos, and he is also the god of time and god of the seasons. The Greeks called Kairos the God of the existential time, or the internal time, with its transitory flow regulated by the emotional dimension of our beings.  Kairos expresses the need to ordinate and organize past, present and future within our minds and souls. Many times we feel that an event that took place in the past is still relevant and influential in our current lives.  These events exist in the construct of the interior dimension of Kairos, not Chronos.

In Greek and Roman philosophies, it translates into the experience of the right moment, the perfect timing. The Pythagoreans called it Opportunity. Kairos is the time potential, continuous time, while Chronos is the duration of a movement, a cycle of life and creation, the fleeting moment.

Usually, he was considered a minor child of Zeus and Tyche. But inside of the genealogy of the gods, Kairos seems to be associated with all of them as a manifestation of their gifts. Kairos, as the son of Zeus, Zeus may be the same; Kairos can be Chronos (Time) but also Aevum (Eternity); Kairos is Athena (Intelligence) and Eros (Love), even Dionysus can be Kairos.

The ancient Greeks had two words for time: Kairos and Chronos. While the former refers to chronological time or sequential, time that is measured, the latter is an indeterminate moment in time in which something special happens, the experience of perfect or right timing. It is also used in theology to describe the qualitative form of time, "God's time" while Chronos is quantitative, the "human time."

In Christian theology, we can say that chromos, the "human time," is measured in years, days, hours and its divisions. While the term kairos, which describes "God's  time", cannot be measured, because "with the Lord, one day is as a thousand years and a thousand years as one day."

In monotheism, Kairos and Aevum become attributes of the one God, gathering ideas precedent of classical Greek philosophy.