Archetypes and Timelines I - Page 3 of 3 - Humanity Healing Network 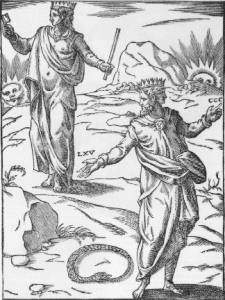 Janus, the ambivalent Indo-European deity with two faces, one on each side of the head, was one of the earliest gods of Rome. He is a god that incarnates a cosmological principle of time and memory. Being considered a solar god, he was the patron of the daylight, as a guardian of the celestial doors of heaven. It was said through tradition that he was the creator of the civil laws, of spiritual ceremonies (especially of the beginning of them) and the cunning of coins-money. Originally, he was known as the god of gods and benevolent creator. In Time, he became the god of change and transitions such as the progression of past to future, of one condition to another, of one vision to another, and of one universe to another and young people's growth to adulthood; along with all humans rites of passage.

He was the god of the gateways and the presiding deity of the beginning of anything and everything. The function of 'god of beginnings[2]' has been clearly expressed in numerous ancient sources, among them most notably perhaps Cicero, Ovid, and Varro. As a god of motion he looks after passages, causes actions to start and presides over all beginnings, and since movement and change are bivalent, he has a dual nature, symbolized in his two headed image.

The opening month of the year (January, from janua, "gate") was sacred to him, as was the first day of each month. He presided over the start, and the Vestals took care of the completion of any enterprise. In general, Janus is at the origin of time as the guardian of the gates of Heaven.  Tradition says that Jupiter himself moves forth and back because of Janus's working. He ruled the birth of gods, the cosmos, humanity and its undertakings. As warden of gates, which he opened and closed, he was depicted with a doorkeeper’s keys and staff. His two faces meant that he watched entrances as well as exits, and saw into the internal as well as the external world, left and right, above and below, before and after, for and against. His shrines were archways, such as gateways or arcades at crossing places.

[1] The Curetes or Dactyls were the five guardians of Zeus as a newborn in the cave Dictate and quietly took care of clashing their weapons and dancing to Cronus, so he would not hear the cries of the child he would want to devour.

[2] In the myth of Janus, it is said he was the first God to be mentioned in highly religious and spiritual ceremonies, and in this aspect is much like the Indian God Ganesha.