The Star of David, also known as the shield or armor of King David, is star-shaped by two equally superimposed triangles with their apices pointed upwards and downwards; forming a six-pointed star. The symbol is also known as the Seal of Solomon. 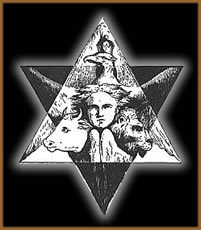 Symbol, or symbolon, is the word that was used in ancient Greece to indicate the two halves of a tablet or token that was usually divided by two different persons to affirm a commitment to hospitality. But through the evolution of the language and through time the word itself acquired many different meanings and connotations.

Symbols are essential elements to the process of communication and can be found in countless varieties through human existence and human knowledge. Many symbols are recognized internationally, but sometimes they are only understood inside of a context, culture or group mindset. For instance, the Cross became, for the Christians, the symbol of the sacrifice, death and redemption of humankind through the death of the Master Jesus. In this way, the symbol can be the element of connection between our immediate reality and a transcendental one (spiritual, cultural or religious context). The symbol is designed to be a representation of something without being a reproduction. A symbol is something that represents an idea, a process, or a physical entity. The purpose of a symbol is to communicate meaning. 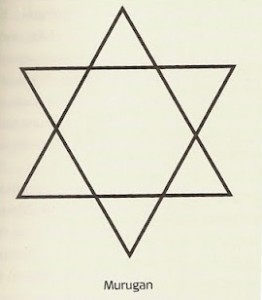 In Hinduism, each angle represents one of the gods of the trinity: Brahma, Vishnu, and Shiva - respectively the “creator”, “the preservator” and “the destroyer”.

The Star of David is the name given through esoteric tradition to an ancient Hindu symbol of Murugan. Murugan is also the name of the son of Lord Shiva who, according to multiple traditional stories, had six faces. In some traditions, Murugan is also called Lord Kartikeya, which means, the Son of the Six Pleiades. While it seems somewhat unreal the correlation between the two different traditional outlines, the symbol itself represents the absolute cosmic reality of the Divine.

This symbol, therefore, has its origins in the Shiva traditions of South India. The primary purpose of this symbol is to connect the “above” and “below” through the ascension of a powerful energy of Kundalini-Shakti. 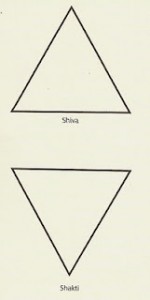 In the Hindu tradition, Kundalini –Shakti, the feminine principal (Shakti) is an aspect of God, and its counterpart is Shiva, the Masculine, and transcendent aspect. In spiritual terms, the separation between these two divine principals causes obscurity regarding consciousness. On the other hand, the Union of the two original principals foments an expansion of consciousness, the understanding of absolute reality and ascension.

“Each God and Goddess of Shiva Pantheon corresponds to a Yantra or mystical diagram. For Shaivism[1] Tantra is not only of a symbol of divinity, but it is the divinity in itself, manifested in a diagrammatic form: Shiva, the masculine principal, the upward triangle representing the Lingam, the open sky. Shakti, the divine feminine principle, is the triangle facing downward evokes the Yoni, the Earth.”

[1] Shaivism also known as Shivam (lit. "Associated with Shiva"), is one of the four most widely followed sects of Hinduism, which reveres the god Shiva as the Supreme Being.