Antahkarana is a way, a conduit, a connection between our intelligent mind and the higher levels of perception and consciousness. Antahkarana is a Sanskrit word for "Rainbow Bridge", the pathway that the Seeker must trailblaze to be released from Samsara.  The weaving of this individual connection is the way to reach a higher conscience of Shambhala.  Antahkarana is also known as an ancient symbol of Spiritual Healing. 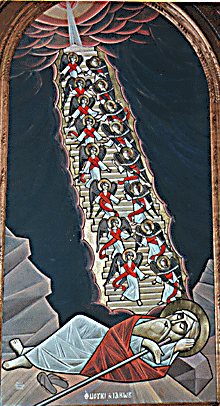 Jacob's Ladder is a ladder to heaven, described in the Book of Genesis that the biblical patriarch Jacob envisions during his flight from his brother Esau.

Jacob dreamed that there was a ladder set up on the earth, and the top of it reached heaven, and behold, the angels of God were ascending and descending on it!

Apocalyptic Literature
The narrative of Jacob's Ladder was used, shortly after the Destruction of the Temple, as the basis for a pseudepigraphic text of the Hebrew Bible: the Ladder of Jacob. This writing, a non-rabbinic Jewish text preserved only by Christians, interprets the experience of Patriarchs in the context of Merkabah mysticism.

and it points towards Jesus Christ who is called with his title of Son of Man:  "And he said to him, "Truly, truly, I say to you, you will see heaven opened, and the angels of God ascending and descending on the Son of Man."

The theme of the ladder to heaven is often used by the Early Church Fathers: Saint Irenaeus in the 2nd century describes the Christian Church as the ladder of ascent to God. 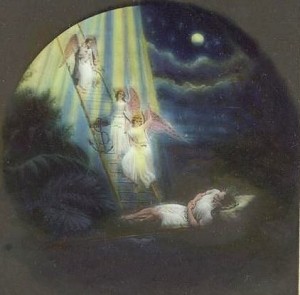 In the 3rd century, Origen explained that two are the ladders in the Christian life: the first, the ascetic ladder that the soul climbs on the earth increasing the virtues; and the second, the travel that the soul does after the death, climbing the heavens up to the light of God.

In the 4th century, Saint Gregory of Nazianzus spoke of ascending Jacob's Ladder by successive steps towards excellence, interpreting thus the ladder as an ascetic path. While Saint Gregory of Nyssa narrates that Moses climbed on Jacob's Ladder to reach the heavens where he entered the tabernacle not made with hands, thus giving clear mystical meaning to the Ladder. The ascetic interpretation is also found in Saint John Chrysostom who writes: "And so mounting as it were by steps, let us get to heaven by Jacob's ladder. For the ladder seems to signify in a riddle by that vision the gradual ascent by means of virtue, by which it is possible for us to ascend from earth to heaven, not using material steps, but improvement and correction of manners." 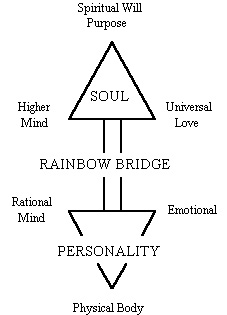 Antahkarana is a cord developed by the Seeker through Meditation & directed Spiritual practice. It requires fortitude and perseverance to reach progress on this path. There are many old residues, negative activated memory cells, and psychic rubbish that need to be cleared of one's energy field to nurture the new openings for the relationship with our souls.

In the first stage of development, the Seeker receives direct help from the Soul, and later from the Monad. The Seeker must manifest the correct Intention and will to reweave the connection, once this new bond will be built upon the Original Cord linked by the Soul to the Lower Bodies, namely Sutratma.

Sutrama is the Thread of Life, sometimes called "the Silver Cord" and it makes the connections between the lower three worlds and Lower Bodies.  It is an independent energy stream that stretches from God, which travels through an infinity of chakra levels through the fabric of dimensions (time/space) until it eventually reaches the grounding point in our Pineal Gland.  This is truly our Spiritual link to higher consciousness.

Antahkarana is a vehicle of Wisdom and Clarity of Purpose in our daily lives. Antahkarana is a thread of Spiritual Light, and it is built just the same way a spider weaves its web.  Its string of light is weaved by the Seeker life after life, and can only be 'energized" by higher Spiritual vibrations.  Antahkarana can only be built with the Mental and high Spiritual qualities of one's Soul.  The construction of the Rainbow Bridge can be very slow.  It requires constant practice and experience in the energetic field.  Its final development turns the Mental Consciousness receptive to the direction from the Soul and later enables it to receive the directives from the Monad Itself. 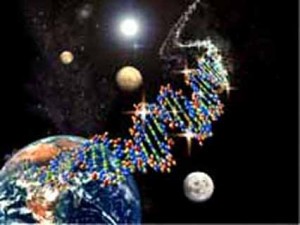 The spiritual union between the higher guidance alchemizes the Personality to be a reliable resource for the Soul on its Purpose on Earth. It is important during the process of developing the personal Antahkarana, to also develop the "Earth Thread", which is the extension of the upper connection of the soul with the Core of Earth.

The relationship between the Antahkarana and the Earth Core is critical, because, through it, we help and support the building of the Planetary Antahkarana, and consequently build a deeper relationship with "All That Is".

Antahkarana is a necessary tool for the activation of Merkabah, astral and time traveling, and Stargate passing.