Merkabah is commonly known as a "Lightbody":  a chariot or vehicle that is used for inter-dimensional travel by Masters and Spiritual seekers. To some, it appears as a 3-dimensional star tetrahedron (a 3D version of the Star of David). It is said to be used to transport the spirit-body from one dimension to another.

Merkabah is not an invention of the New Age movement.  It is a real technique that has been taught in various religious and spiritual disciplines since ancient times. We can see and understand the accounts of its existence in many ancient texts, including the New Testament of the Bible: 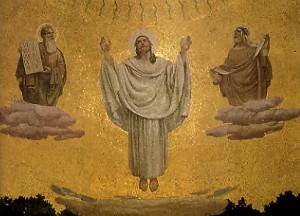 "As he was praying, the appearance of his face changed, and his clothes became as bright as a flash of lightning. Two men, Moses and Elijah, appeared in glorious splendor, talking with Jesus. They spoke about his departure, which he was about to bring to fulfillment at Jerusalem. Peter and his companions were very sleepy, but when they became fully awake, they saw his glory and the two men standing with him.  As the men were leaving Jesus, Peter said to him, "Master, it is good for us to be here. Let us put up three shelters-one for you, one for Moses and one for Elijah." (He did not know what he was saying.)   While he was speaking, a cloud appeared and enveloped them, and they were afraid as they entered the cloud. A voice came from the cloud, saying, "This is my Son, whom I have chosen; listen to him." When the voice had spoken, they found that Jesus was alone."
~ Luke 9:32-36

The Transfiguration of Jesus is an event reported by the Synoptic Gospels in which Jesus is transfigured upon a mountain (Mount Tabor) (Matthew 17:1-9, Mark 9:2-8, Luke 9:28-36). Jesus became radiant, spoke with Moses and Elijah, and was called "Son" by God. It is one of the miracles of Jesus mentioned in the Gospels. 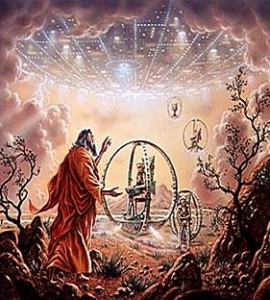 This miracle is unique among others that appear in the Gospels, in that the miracle happens to Jesus himself.  Thomas Aquinas considered the Transfiguration "the greatest miracle" in that it complemented baptism and showed the perfection of life in Heaven.

But the transfiguration of Christ Jesus can also be read as the "miracle" activation of His personal Merkabah. The Activation itself is said to turn the physical body to light, and it allowed the communication with Light Beings across the fabric of time and space.

We can also mention the references in the Old Testament through the Visions of Ezekiel.  The Book of Ezekiel is a book of the Hebrew Bible and also recognized as divinely inspired (and therefore canonical) by most denominations of Christianity.

There are several references to "chariots of fire" or Merkabah in the Old Testament of the Bible.  The Prophet Elijah was carried up to Heaven in this manner.  Behold, a chariot of fire and horses of fire, came between them, and Elijah went up by a whirlwind into heaven. (2 Kings 2:11)

Behold Jehovah will come in fire, and His chariots shall be like the whirlwind. (Isaiah 66:15)

Jehovah covereth Himself with light as with a garment, He stretcheth out the heavens like a curtain, He layeth the beams of His chambers in the waters, He maketh the clouds His chariots, He walketh upon the wings of the wind. (Psalms 104:2, 3).

Ezekiel was a priest living with the Jewish exiles in Babylon after the taking of Judah and Jerusalem by Babylon, around 580-600 B.C.

Ezekiel has visions of God appearing like a Man, yet glowing and dazzling with fire; and, of angelic beings with four faces, wings, hands, and WHEELS within WHEELS that contained all-seeing eyes (Ezekiel 1 and 10; also 8). 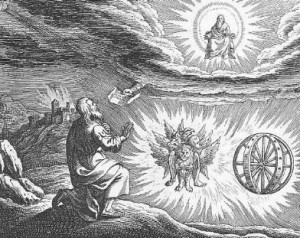 In his inaugural vision (Ezekiel 1:1-3:27): The first chapter of the Book of Ezekiel begins with Ezekiel's record of his vision of God's spectacular chariot. In this vision, God approaches Ezekiel as a divine warrior, riding in his battle chariot. This chariot appeared to be drawn by four living creatures each having four faces (of a man, a lion, an ox, and an eagle), and four wings. These living creatures are traditionally known as the fixed signs of the astrology zodiac, namely Aquarius (the man), Leo (the lion), Taurus (the ox), and Scorpio (the eagle is the second symbol of the Scorpio sign). They could travel forward and backward, up and down, and they moved in flashes of lightning. Beside each "living creature" was a beryl-colored wheel, constructed as "a wheel within a wheel," with "tall and awesome" rims that were full of eyes all around. In this appearance of God unto Ezekiel here, he commissions him to be a prophet and a "watchman" in Israel: "Son of man, I am sending you to the Israelite." (2:3) 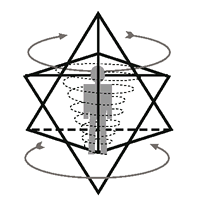 Merkabah is more than just a simple practice of a conjunction of Breath Techniques and Mudras as is discussed in some modern teachings.  It is clear that Merkabah can be activated by the regulated and disciplined use of Prana, but the truth resides in the fact that there are more active elements that are necessary and participants in the true activation of your Merkabah. By the simple emulation of the breath techniques, the Seeker may be able to activate their Lightbody artificially, but just like an empty shell:  it will not experience subsistence for long. It is only though the correct techniques, the correct designation of the Intentional Meditation, along with the clear communication with the Higher Self, that one can get their Merkabah activated by Divine Grace.

Some of the elements that are a priority in the permanent development of Merkabah is the opening and development of one's personal Antahkarana.  Antahkarana is a Sanskrit word for "Rainbow Bridge", and is our primary connection with our Soul and Higher Bodies.

Humanity Healing will be offering an eBook and seminar on how to correctly develop your Merkabah, to open and expand the Antahkarana, and the balance of the polarities with Kundalini.   Visit the Member area for the announcement of dates.